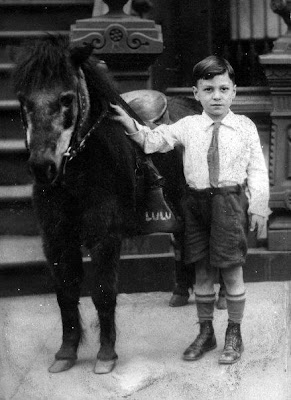 Dad's an amazing man, still, and back then before Brooklyn's brownstones were remodeled for single family dwellings and before poor neighborhoods had been gentrified beyond recognition by yuppies and hipsters with trust funds, he was just a scruffy kid in short pants running in the mean streets of Brooklyn, New York.  No he didn't have a pony.  In this picture, someone must have spent some change to get a picture taken with a pony. This is before he passed through the blackboard jungle of Manual Training High School, before he joined the Navy during the Korean War and was stationed in Hawaii, before he met Mom in San Francisco and got married, before he had kids, before he worked days and went to night school, before he became a teacher, before grad school and eventually earning his doctorate, before he retired...This was his short pants days.  Happy father's day, Dad.  Love ya.
Posted by Bob Rini at 11:53 AM