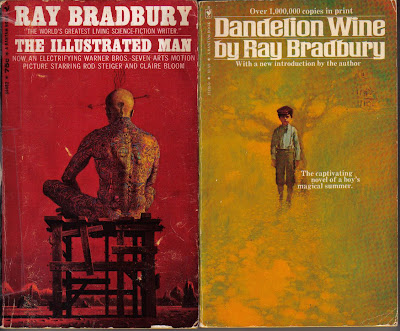 I read all the Ray Bradbury I could get my hands one summer in Corvallis when my dad was working on his master's degree at OSU. I rode my bike around town a lot that summer, exploring this new world we'd moved into for the season, a fish out of water on a college campus, and I found Ray Bradbury in the library. I didn't just read, of course. This was the summer between my fifth and six grade, and normally I would have been playing baseball on our school team where I'd carved out my niche playing terribly in the outfield (how did they survive without me?) so this season off I played catch with Kolakoswki, another kid in the apartment complex whose father was also working at Oregon State.  Kolakowski was a good guy, and we cracked a lot of jokes and played catch.  I drew pictures, mostly monsters and superheroes.  Across the hall, a college student named Jim was exactly what I imagined a college guy should be: he had a motorcycle and a great stereo component system, and he let me listen to music on his headphones--great stereo headphones with a long cord--and he had cool albums: The Doors, Blue Cheer, The Beatles.  I borrowed his bike once without telling him--I have no idea why, maybe mine had a flat--but my dad found out and screamed holy hell and made me march right back up to Jim and apologize. Lesson learned.  That summer, I acted in a play, a serious adult play in a theatre-in-the-round, with lines to memorize and rigorous, nerve-wracking practices and performances in front of a paying audience.  After the run of the play, the cast party was held outdoors on a beautiful sunny day in the country, and it was full of Frisbees and dogs and beautiful "older women" in their teens, and "Classical Gas" played non-stop.  That summer, I rode my bike a lot. I covered serious ground, exploring the campus trails and even out to the country, out King Street, if I remember correctly. Sometimes I explored the city, a small college town, and on one such trip I discovered the city library on Monroe (funny how the names of streets come back years later). That's where I met Ray Bradbury. I grabbed some of his books and headed for the park to begin one of my first great reading experiences. Kids these days read Harry Potter, but I had science fiction collections of short stories, and Ray wrote some of the best. I sprawled out under a giant live oak and as the band played in a gazebo covered with Old Glory bunting. Corvallis was that kind of small town. The band played John Phillip Sousa marches (I played in out school band, so I recognized some of the tunes) and families ate picnics on the lawn and college kids strode past in the sunshine, carrying books to class. I read my books. Time passed and it was getting late, and I threw the books in my bag and rode back to the apartments for dinner. Mom and dad would be waiting. Little sister Bekki would be bawling. I would ride up and lock my bike and head inside where Jose Feliciano might be playing "Light My Fire" on the stereo. Mom and Dad quizzed me at the table about where I'd been and what I'd seen, but it was only a formality, and I said "nothing" and "nowhere" and "riding my bike" and that usually halted the interrogation.  I wasn't lying exactly, but I could hardly say I'd been exploring the canals of Mars all afternoon, or escaping drowsy lions on the veldt, or visiting the illustrated man or watching a weird carnival pitching tents on the edge of town.  So we said grace and started dinner, and I passed the mashed potatoes and gravy with a special knowledge that things were not what they seemed.  Not by a long shot.  When summer finally ended we packed our things and I said goodbye to Kolakowski and Jim the college guy and we loaded the white Ford Custom and headed back to our own town, where I started sixth grade.  Back at school everyone looked exactly the same as when I'd left but I'd changed and nobody could tell.

Your experience with Ray Bradbury mirrors mine! Reading his work changed who I was and who i would become.