America has always been a corny reactionary place. Don't get me wrong; Within its myriad selves there have always been edge dwellers pushing the boundaries of the arts and working for cultural and social change--movements that boggle the minds of the conventional. Some worked quietly in the margins, got "clean for Gene" and canvassed door to door, acting like good kids, while others seemed to delight in freaking out the squares. The french had a phrase for it. Épater la bourgeoisie! This was the rallying cry for the French Decadent poets of the late 19th century including bad boys Baudelaire and Rimbaud. It means to shock the middle classes.

In America, it didn't take much. We forget how--eventually--outsider cultural movements often influence the mainstream. Watching this television show ("Hullabaloo") trying to hook into the excitement youth culture was generating, which was undeniable at this point, shows the dilution of rock and roll to safe variety show standards. Meanwhile, outside the gates of Studio City, the barbarians were really rocking--the Beatles, the Stones, Bob Dylan, the Animals, the Kinks and countless others were rattling the cage. The kids loved it. This tired show enlisted Jerry Lewis and his son Gerry (who had his own terrible pop band) to sing a Beatle song. The results were predictably horrendous. Believe me, the kids could tell the difference.

You don't have to read Marcuse or Naomi Klein to see that a vast society based on commodities will co-opt radical change--absorbing and reforming and creating a product based on what was once edgy and shocking. The avant garde becomes the trend becomes the cliche. You want Utopia, you get Fruitopia.

"Help!" was written by John Lennon, and was one of the first Beatles songs to turn inward and away from the tropes of rock and pop to a more personal vision. Lennon was in agony, pure and simple, and--inspired by the strangely personal work of Dylan--decided to write a song about it. Sure, it has a bouncy rock beat, verse chorus verse, but there is also something very real about the song.

Of course, the Lewis family missed it completely. Jerry was an old school Vegas schlocker, a representative of the cheesy show biz world that openly mocked these longhaired British rockers singing "Yeah, yeah, yeah" and stirring up the teenage girls. Jerry's contempt seethes below the surface. This fad will be over soon, he seems to say, but the gods are tricksters if nothing else and love to toy with such arrogant hubris. Now, who looks silly? The revolution moves on, and even the hopelessly reactionary benefit from the artists working the cutting edge. We evolve--reluctantly, perhaps--but finally there is a loosening up of the rules. The vanguard may have moved on long ago, but we can pretend we've discovered a new path on our own. 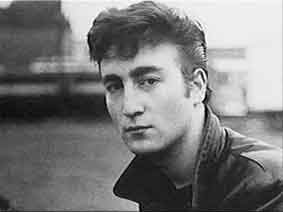 A teenage John Lennon eyes the world he will change.
Posted by Bob Rini at 8:53 AM