Evangelical nutballs threatening to burn the Quran are nothing new. In fact, bookburners are nothing new and have an incendiary tradition that goes back even further than the most famous bookburners, the Nazis.

Girolamo Savanarola, an extremist monk in fifteenth century Florence, was famous for burning books. A fundamentalist enemy of the Renaissance, Savanarola organized the infamous "Bonfire of the Vanities," in which he burned humanist books, priceless Renaissance paintings, playing cards, festival masks and anything else he felt didn't soberly and seriously celebrate God. Florentines were taken under his spell for a time (including the master Botticelli, who submitted many of his paintings to the flames) but eventually grew tired of his religious extremism and burned Savanarola himself on the same spot.

The Florentines weren't the only ones sick of bookburners. The other day, according to news reports, Jacob Isom, a 23-year-old skateboarder from Amarillo, Texas, skated by a religious nut preparing to burn a copy of the Koran. In a flash, Isom snatched the holy book, which had already been doused in lighter fluid and awaited the torch.

"Dude, you have no Quran!" the skateboarder told the evangelist, before making off with the book. 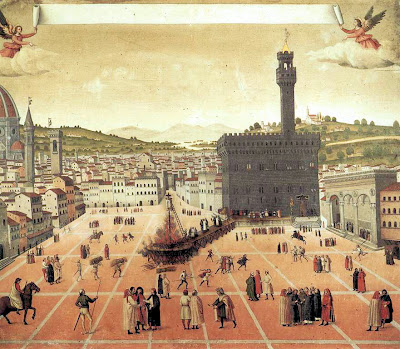