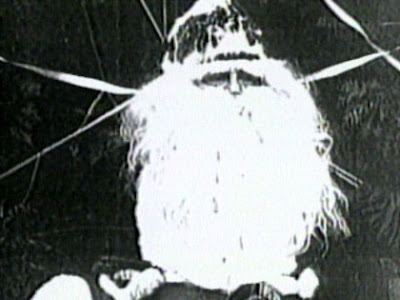 As you can imagine, actual photographs of Santa Claus are exceedingly rare. There are plenty of of fake Santas, of course, and this time of year they can be found sitting in department stores and ringing bells on street corners, but these are only Santa's helpers. These helpers are frequently photographed, and these photographs are virtually worthless. Actual photographs of the real Santa exist, and according to some people the government has known about them for years. Some deny their existence, and some say they were destroyed or classified Top Secret and hidden in Area 51 by the military--along with the wreckage of an alien spaceship and a stag movie starring Marilyn Monroe--but a whistleblower recently leaked the photographs and the world can judge for itself. The photograph above is reported to be St. Nicholas early in his career when he wasn't so secretive. The photograph below, showing Santa loading a truck, was reportedly taken with a hidden camera by a disgruntled elf. The elf, and his accomplice (shown grinning on the truckbed), were summarily fired, but somehow this picture made it out of Toytown. 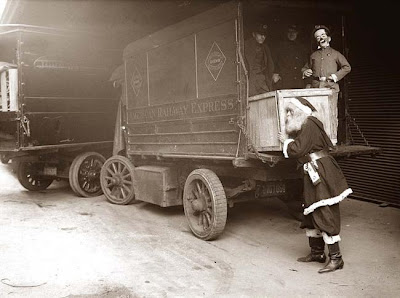 Santa's last known public appearance was at an orphanage in New Jersey in the 1930s, and while the good man requested no pictures someone snapped a surprised St. Nick handing out books and advent calenders to orphans. 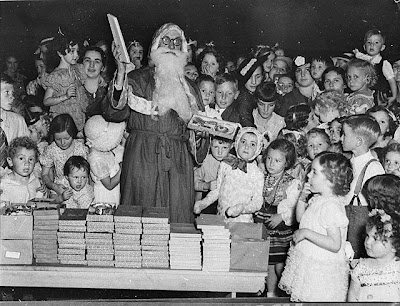 Of course, we have no way of verifying that these are actual photographs of Santa Claus, but they seem pretty authentic to us. What do you think? Is this the real Santa Claus? there a Santa Claus at all? We quote the newsman Francis Pharcellus Church in his famous answer to a little girl who asked that question.

Yes, Virginia, there is a Santa Claus. He exists as certainly as love and generosity and devotion exist, and you know that they abound and give to your life its highest beauty and joy. Alas! how dreary would be the world if there were no Santa Claus. It would be as dreary as if there were no Virginias. There would be no childlike faith then, no poetry, no romance to make tolerable this existence. We should have no enjoyment, except in sense and sight. The eternal light with which childhood fills the world would be extinguished.
Posted by Bob Rini at 3:03 PM