Elvis Presley sings a couple Christmas songs in a loosey-goosey jam session during his '68 Comeback Special. It had been a tough few years for the King. His last number one single was back in 1962, and now the swinging psychedelic sixties were under way and bands like the Beatles and the Stones were running the show. What happened? After coming out of the army, Elvis had gotten lost in a cheesy swamp of Hollywood teen movies, but now he had a chance to make one last stand. He got a special lined up on NBC, and he went into training. He trained hard. Maybe only blue-haired old ladies would watch it, but once upon a time Elvis had been a rocker with lots of sass, a swivel-hipped heartthrob who tore down the house with his gyrations and his soulful singing, and he wanted to get one last shot at it. People were stunned when he emerged from the shadows looking mean and lean and dipped in leather. He sang a few big production numbers, and he had a good time jamming with his old band. This was the last glimpse of greatness before Graceland became his personal prison and he spiraled downward into a zombie half-life of pills and booze and fried banana sandwiches only to die like a bloated Las Vegas lounge blimp in a white jumpsuit and a cape like a sad sack superhero down on his luck. Here, for a few golden moments, he was great again. 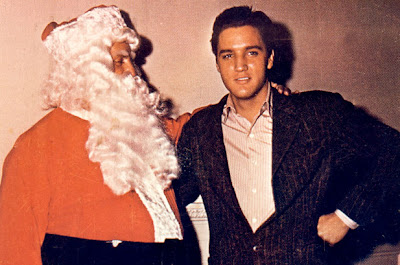 Santa Claus was back in town that night.
Posted by Bob Rini at 4:33 PM