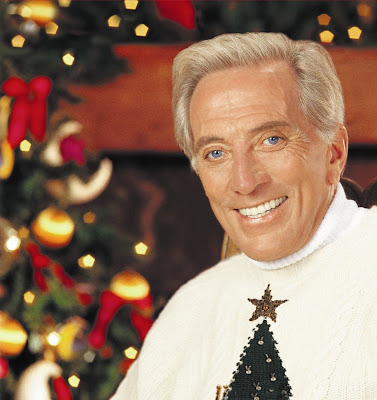 If you grew up in the 1960s, you remember the Andy Williams Christmas Special. Bland as vanilla custard, and shot on a studio sound stage sparkling with fake snow, the show featured Andy, in a thick winter sweater and sporting an incongruous tan, crooning his way through Christmas carols with a cast of extras, dancers and singers. The whole affair probably cost more than Vietnam (and probably shared the same sponsors), but that was okay because the world out there, beyond the studio walls, was never allowed to intrude on Andy's world. For all we knew the Christmas Special was beamed from another planet entirely, but that was fine with us since it signaled the holiday season like no other harbinger, and many a hardened, cynical bastard was softened by its over-produced invocation of the Christmas past, Dickens via Studio City, the kind of good clean family fun you might find at Branson today. Sure, this treacle made your fillings ache, but if you stayed with it past the initial sugar shock the holiday spirit kicked in like peppermint mescaline and you were suddenly tripping Christmas balls.

How we loved the Christmas Special. Sure, we knew better. Andy was cheesy and old-fashioned and the songs were corny but we liked it the way we liked Christmas window displays downtown or those TV commercials with Santa riding a Norelco shaver. It was kitsch before we knew the word, and sure, maybe Cronkite was reporting war and assassinations, civil rights and psychedelia, student demonstrations and Black Power, but Andy's world was safe and cozy even if the real world was going up in flames, a magical winter wonderland where you could ease off your slippers, sip an egg nog, and drift into nostalgic holiday reverie unhindered by anything even vaguely resembling reality. You're probably too hip and jaded to dig this now, or too dishonest to admit it, but try to play along and imagine another time in a world long ago that never really existed, and get your cheer on. A'ight?