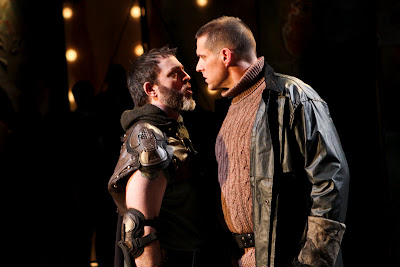 We just watched some greedy politicians lying their asses off, a mob of protesters mic-checking the rich and powerful, and some battle-traumatized soldiers turning their guns against civilians. No, we weren't watching the 6 o'clock news, but watching a four hundred year old play, Coriolanus. Few understood human nature like Will Shakespeare.

Actors from the Seattle Shakespeare Company took the stage and brought us back to the earliest days of Rome--some five hundred years before Julius Caesar. The cast was strong and agile, bringing humor to shifty Patricians and Plebeians vying for power. David Drummond, in the title role, brought the hulking soldier to life. A large man, he paced the stage like a lion trapped in a pit. He swung his sword at enemies but was never quite sure who his enemies were until he finally fled his "supporters" and joined the rebels in the hills bent on attacking Rome. Drummond joins a long line of actors playing the conflicted warrior, including Laurence Olivier, Richard Burton, Anthony Hopkins, Ian McKellen, Toby Stephens, Robert Ryan, Christopher Walken, Morgan Freeman and Ralph Fiennes, who is releasing a film based on the play. (Watch the movie trailer below)