MLK DAY: or WHY YOU'RE OFF MONDAY 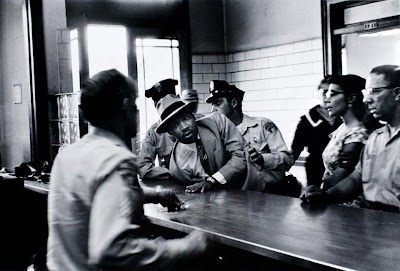 History gets rewritten when rebels die, and MLK suffered a doozy of a celebrity makeover. Now everybody acts like his good buddy, as if he's some non-threatening teddy bear perfect for dragging out during campaigns and photo ops. It's good to remember King was a savvy community organizer, a protester who believed in non-violence as well as civil disobedience, an activist who had the guts to take on a corrupt, unjust system. Then, as now, the comfortable mainstream wagged their fingers at protest and civil disobedience, and the middle class, law-abiding Silent Majority supported those cops with their riot batons and dogs and firehoses...just like they do now. Now people think King was involved in a righteous struggle for dignity and human rights because it's safe in the past, and history has judged it so, but at the time folks got jittery when these agitators blocked their route, carried their signs, sang their songs, and occupied their Comfort Zone. They still do. 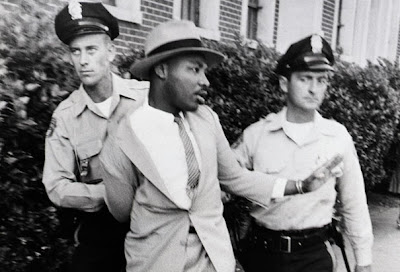 "A true revolution of values will soon cause us to question the fairness and justice of many of our past and present policies. On the one hand, we are called to play the Good Samaritan on life's roadside, but that will be only an initial act. One day we must come to see that the whole Jericho Road must be transformed so that men and women will not be constantly beaten and robbed as they make their journey on life's highway. True compassion is more than flinging a coin to a beggar. It comes to see that an edifice which produces beggars needs restructuring." -- Dr. Martin Luther King Jr.
Posted by Bob Rini at 7:34 PM