SO LONG, ETTA AND JOHNNY 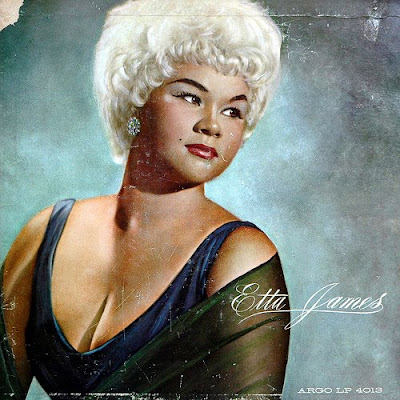 You heard "At Last" at the last twenty-nine weddings you attended, and that song will undoubtedly accompany every tribute you'll hear today for Etta James, but she did plenty of other songs you didn't hear on that marriage mix-tape. In fact, better songs. So we're going to remember Etta our own way, performing a soulful classic she wrote, "I'd Rather Go Blind," accompanied by Dr. John and BB King. Despite what Newt Gingrich says about black people, Etta worked her ass off all her life. Born Jamesetta Hawkins, she lived a life no multimillionaire presidential candidate with a Tiffany account would trade her for, no way, and she struggled hard against poverty, racism, heroin addiction and leukemia, which finally killed her a few days shy of her 74th birthday. We will miss Etta James.

We lost another great musician this week, the inimitable Johnny Otis. Ioannis Alexandres Veliotes was his real name, and this Greek American musician, bandleader, songwriter, impresario and disc jockey was often called “the godfather of rhythm and blues." He was a masterful entertainer, and he led a wild, mixed race band (unusual at the time) that could swing, play R&B, and both rock AND roll. Oh, and he could do that crazy hand jive. Go, Johnny, Go!