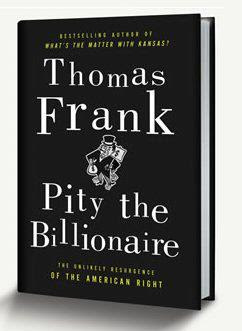 In Bookforum, Will Bunch lays out the manipulation of Tea Party-type resentment away from the real culprits of the 2008 crisis (who benefited handsomely) to the usual suspects of conservative conspiracy in his review of Thomas Frank’s latest book, Pity the Billionaire. Bunch lays out the shift in a choice paragraph, starting with CNBC’s Rick Santelli: “The previously little-known cable reporter was instrumental in articulating the resentment that would turn the blame away from the millionaire bankers who made lousy bets on high-risk mortgage-backed securities, onto the lower-middle-class “losers” who were enticed into taking subprime loans.” Further on, “…the public didn’t need much convincing that the usual suspects—Washington liberals and their allies in the media and academia—were the real villains of the 2008 crisis.” This results in all these resentful conservatives who “pity the billionaires, who are still routinely described—despite all the evidence to the contrary—as ‘job creators.’” (Unfortunately, the story has no link online so pick up a copy of Bookforum.)

As for Thomas Frank, he wrote a book essential to understanding the bait-and-switch political con game in the heartland, "What's the Matter With Kansas." By all means pick it up and read it. In his well-researched book, Frank makes it easier to understand such a huge swath of America working hard against its own interests. As for the new one, it's on my list.
Posted by Bob Rini at 9:39 AM