Jack Davis (b. December 2, 1924) is a cartooning genius. Wipe the slate of all those phoney high art pretenders, those MFAs who can't draw a straight line, those artistic ass-kissers who were born on third base and think they hit a home run. Forget about the heavy conceptual videographers with one trick up their sleeve, the chilly academic artists and those apple-polishing art teachers' pets who flatter the critics with easy-to-explain work and camera-ready wall-text. Jack Davis is the real deal. He worked his way up the ladder with mad skills in a much maligned art form, the humble comic, a medium sometimes sneered at by the Downton Abbey art aristocracy as common and frivolous, but Jack Davis could draw rings around all of them. Years ago, as a wide-eyed youth, I meticulously imitated his Mad Magazine caricatures (paying particular attention his shoes; nobody draws wingtips like Davis), slaving over his freewheeling, inspired work. I loved his film posters, too, with characters spilling out from the visual plane, the visual madness of "It's a Mad, Mad, Mad, Mad World" poster, and his promo for NBC for "Get Smart," which I sent away for and dutifully posted over my bed. Someday, Jack Davis--and all the cartoonists and illustrators and the real workers of the art world--will be recognized after all the Jeff Koons and Damien Hirsts have been forgotten. Platinum, diamond-studded skulls? PUH--leeze. Giant teddy bears? Pure junk. The Faberge eggs of the now, useless and expensive, mere signs of wealth but certainly not taste. Check out Jack's work. 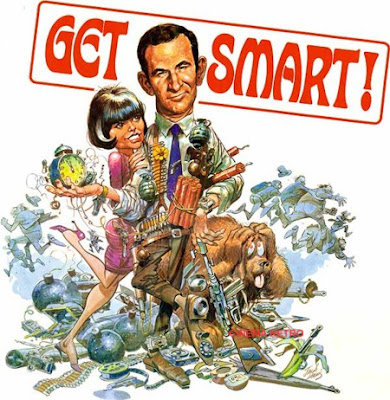 And don't miss a tribute to the man by some of the best cartoonists around--and me, too! Check this out:

CLICK TO ENLARGE
Posted by Bob Rini at 9:21 AM

Wish i could check it out, i am a huge fan of Dvis work. Shame poster art has gone now in favour of digital cheapo giant heads.

I agree. Jack Davis was the bomb. He spoke to us at the event via Skype--says he still draws and paints every day.