Mitt Romney has picked his perfect match for running mate, Congressman Paul Ryan. No surprises here: Ryan is another wealthy, white, privileged male with political connections, another smiling clueless heartland bland Anglo-Saxon in an expensive suit with a pile of money in the bank.  Ryan is a Romney clone ever further to the right, but who knows? Maybe this one will be able to distract a sufficient number of Americans with short attention spans and no sense of history.  Maybe this one will reveal his tax returns. 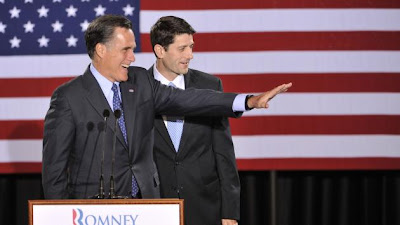 But who is Paul Ryan? This video says more about him than any detailed rundown of his far-right political record, any in-depth analysis of his economic plan favoring the rich, any string of tales that exhibit his consistent insensitivity to issues facing the jobless, the poor, the middle class and non-Republicans. In this video, Ryan jokes as Tom Nielsen, a 71-year old retired plumber, questions his plan to gut Social Security and Medicare and is wrestled to the ground. Ryan gets some laughs from his grim mob of supporters as Nielsen is knocked down, handcuffed and arrested for trespassing and resisting arrest. His real crime? Questioning his congressman during Ryan's only public appearance scheduled during the August recess. So much for democracy.
Posted by Bob Rini at 9:39 AM

Good points. Paul Ryan is also an idiot global warming denier, which is the opposite of fiscal intelligence, considering potentially trillions in future mitigation costs if nothing is done. The drought we're in right now is probably AGW-related and it's not cheap. Worsening fires and floods are part of the same deal. But people like Ryan can only make flip comments about snow in winter.