THE WAR ON WOMEN 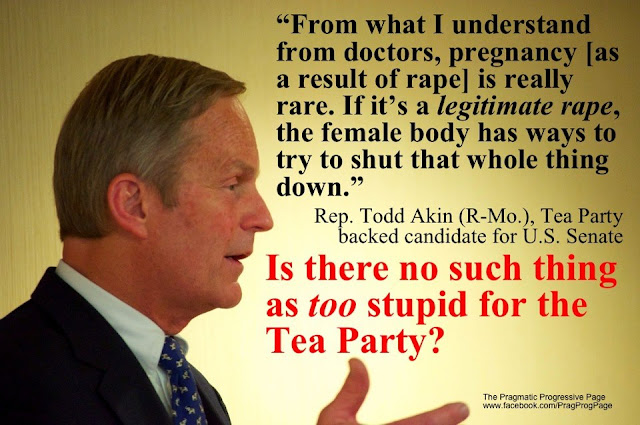 Right-wing Republicans are consistently anti-intellectual, anti-science and anti-women--so this idiotic superstition about rape comes as no surprise. It serves a purpose. The very notion of "legitimate rape" (what a dead giveaway) should tip us off that Akin and his gang are once again trivializing suffering and blaming victims. This is the GOP stock in trade. In this case, in their tiny minds, sex is bad and women are trying to get away with it without proper punishment, using abortion as birth control--and this nifty superstition allows these right-wing bible-thumpers to oppose abortion in ALL cases, even after rape, since "legitimate" rape rarely results in pregnancy. Once again, according to asshats like Akin, wanton harlots cannot be trusted; they're using rape--which apparently isn't so bad--as an excuse to have abortions, to jump from bed to bed without consequences and flagrantly violate the simple, inflexible rules of a wrathful God handed down during the Bronze Age, as well as the laws of his poor, God-fearing, sexually repressed Republican followers.
Posted by Bob Rini at 3:42 PM