Dylan is back and here is the controversial video from the new signal, Duquesne Whistle. It plays like an old time tune and then kicks into Western swing and you can feel that train rolling through Carbondale and on through the great American landscape. The video starts like a Chaplin silent film (the things we do for love!) and slips into Martin Scorsese territory by the final verse. The record is Tempest, which also happens to be the name of Shakespeare's last play. Maybe that doesn't mean anything, but these songs are freighted with finality and death is over every shoulder. 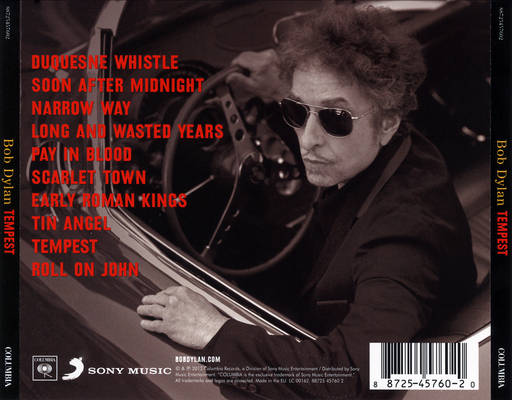 I've been listening to this record for the past couple weeks and it's a rollicking, greasy, jukebox playlist from Old Weird America--there's blood on these tracks--and a high body count that probably startles some of the more genteel salonistes who write record reviews. This is a raucous bloody album with powerful writing and singing--and no, he doesn't sound like he did in 1962, or 1972. His voice is a raw, savage instrument played beautifully, fitting the material as the ship rocks and the ballast shifts and deaths pile up: gunshots, knife wounds and drowning. This is his best album since another great sanguine outting, Blood on the Tracks. Two thumbs up.
Posted by Bob Rini at 10:09 AM