Everyone knows Fox News is a biased news network just this side of Goebbels' Ministry of Public Enlightenment and Propaganda, a high dollar public relations firm serving the right wing lunatic under the guise of news coverage. As such, nobody expects Fox News to present a "fair and balanced" view of the political conventions, and they did not disappoint their viewers, the consistently most misinformed news watchers, according to several polls.  Whether the Fox anchors were nit-picking Democratic use of "details" or rhapsodizing about an old man arguing with an empty chair, they were working hard to present their bias and keep their viewers misinformed, elevating double standards to new levels. Thank God (take note: I mentioned God) Jon Stewart is here to take them to task. They don't like Jon, and not just because he's a smart-aleck liberal New York Jew, which would drive those stuffed shirts crazy in the best of circumstances, but because he calls them on their bullshit.  Over and over.  He needles them with wit and intelligence and a big dollop of attitude.  He rubs it in their faces.  Here he breaks it down once again.  Thanks, Jon. 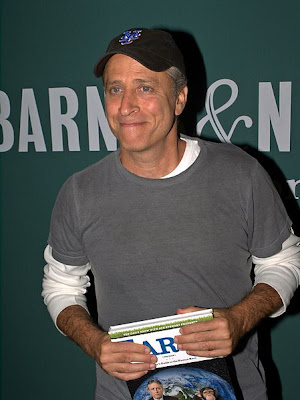