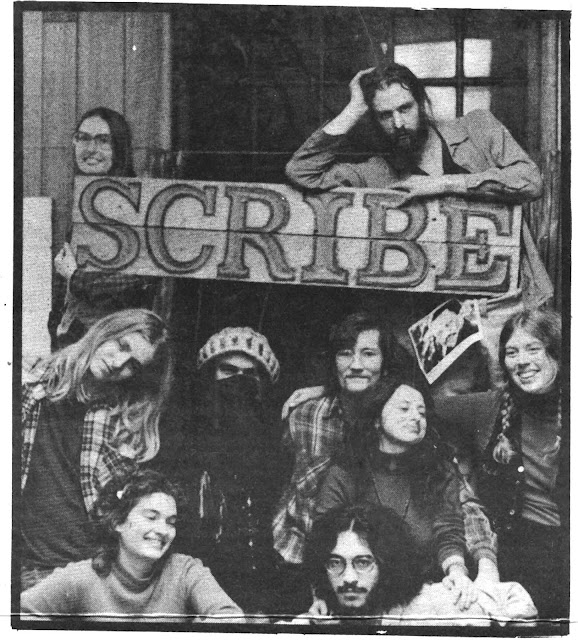 The Scribe was an underground weekly newspaper in Portland in the Seventies. Production offices were in the Centenary Willbur Church, a swayback structure honeycombed with “Movement” offices, environmental groups, a cafe and a theater troupe. No, Portland didn't just become weird lately, with Portlandia and its recent discovery by fixed-gear hipsters--PDX was always weird. Let's say the city always allowed a certain freedom for subcultures and outsiders. The Scribe reflected an uneasy alliance of writers and art screwballs, cartoonists and musicians, Drop-outs and Reedies, drifters and outlanders, isolatos and politicos, feminists, hippies and punks. Every Thursday night was Production Night, an all-night affair that stank of waxers and X-acto knifes, typesetting machines, beer, weed and bulk-bin fig newtons from the now-defunct Corno's. Back then, newspapers were built by hand--no computer-designed layot--just cutting and pasting on massive wooden tables. I was a writer and cartoonist for the rag, but like everyone else I pitched in on Production Night, grinding away until the paper was “put to bed” in the morning. Long before Willamette Week and corporate "alternative weeklies," we put out a real alternative to the Snoregonion, an irreverent eye-popping issue every week jammed with provocation, underground comics, poetry, a bar and tavern guide, movie listings and reviews of jazz, rock and this new thing called punk. You could be as creative as you liked, as long as you were willing to do the work. The editors were friendly--we were on a mission, after all--and there were great parties. Sure, the rugs were kind of stinky and we often got lost down rabbit-holes of consensus decision making, but it was worth it. I drew cartoons, wrote stories and assigned myself interviews with Patti Smith, the Ramones and Muddy Waters. It was great. I came across this picture in an old trunk and had to laugh. Good times.
Posted by Bob Rini at 12:02 PM


ok. left to right, and top to bottom:

i'm still a wayward artist in portland, francisco an eternal street poet & bosom drinking pal of walt curtis & not seen for a decade, mimi was by last spring & lives in santa fe & speaks of betsy, deborah has also been around here forever, in the theater and exquisite singer of jazz standards, bob has a website.