To hell with Bing Crosby--this is the best version of "White Christmas." Performed by the Drifters, it features Bill Pinkney on lead bass and Clyde McPhatter on tenor. The Drifters were a doo-wop and R&B vocal group in the 1950s that had many hits. They were "the least stable vocal group" of the era, according to Rolling Stone, due to being low-paid, hired musicians. In other words, some people got very rich off the Drifters, but not the Drifters. Typical capitalist crap, you might say. Those money men are now long forgotten, yet we still have this wonderful version of "White Christmas," and many other vocal classics. This cartoon by Joshua Held is pretty cool, too. Added trivia: this song was included in the Special Features section of "A Christmas Carol," a short film I directed many years ago starring the Hoyt Street Players. 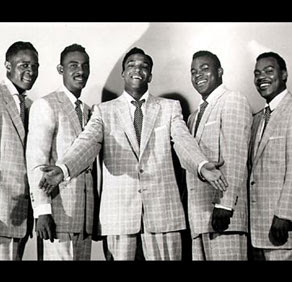 The Drifters
Posted by Bob Rini at 8:07 AM

Just great!
Thanks for sharing.

Merry Christmas to you, too!