FOR WHAT IT'S WORTH 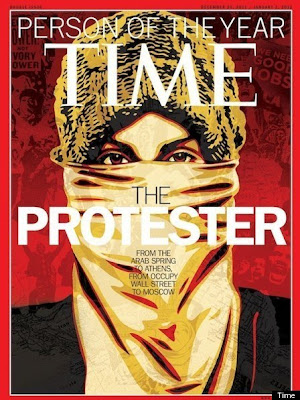 Time Magazine's Person of the Year: The Protester. This has been quite a busy year for the Protester, with uprisings all over the world. The cover mentions the game-changing movements of Arab spring, the demonstrations in Greece and the Occupy Wall Street movement, which has nurtured opposition offspring across the USA and even the world. Not that it takes Time Magazine to legitimize such a revolution, but it sure beats the hell out of last year's Person of the Year, Facebook CEO and billionaire Marc Zuckerberg. Still, it's undeniable that these movements for social and economic justice have spread like a prairie fire. Even Time gets it:

It's remarkable how much the protest vanguards share. Everywhere they are disproportionately young, middle class and educated. Almost all the protests this year began as independent affairs, without much encouragement from or endorsement by existing political parties or opposition bigwigs. All over the world, the protesters of 2011 share a belief that their countries' political systems and economies have grown dysfunctional and corrupt — sham democracies rigged to favor the rich and powerful and prevent significant change. They are fervent small-d democrats.

-from Time's cover story, by Kurt Andersen
Posted by Bob Rini at 8:52 AM