The data* is in, and the scientists at Science Friday have given us another good reason to spike the egg nog. We've always known that nothing livens up a frothy nog like a splash of spirits (we've conducted our own independent experiments), but now the scientific community backs us up. And who are we to argue? If you're one of those people concerned about the raw eggs in homemade egg nog, you want to watch this video.

Egg nog is a traditional Christmas drink. People have been spiking it with their favorite alcohol for ages. How long exactly?

"By the mid-1760s patrons were drinking eggnog, juleps, sling and sanger in addition to the punch and toddy already available."
---"Taverns and Tavern Culture in the Southern Colonial Frontier: Rowan County, North Carolina, 1753-1776"

Egg nog is first mentioned in the Oxford English Dictionary in 1825 as "A drink in which the white and yolk of eggs are stirred up with hot beer, wine, or spirits."

That's the one. Some like to add bourbon, some prefer run or brandy. Some will drink a virgin nog, and that's fine, too. Some like it goopy yellow and storebought, and some prefer it homemade. A little grated nutmeg adds to the flavor, and, some claim, also acts as a mild hallucinogen but you would probably have to ingest a kilo or two to get the sugarplums really dancing. Here, as in all things, moderation is key. 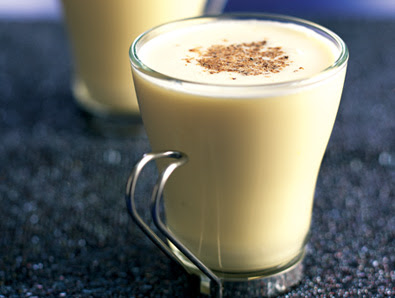 *By the way, according to Grammarist, "data" was originally the plural form of datum, a Latin noun meaning a thing given. "Both words were relatively rare in English until modern times, and it wasn’t until the late 19th century that English-speakers, especially scientists, began using data in the sense in which it’s used today.For as long as data/datum has been used in this sense, there have been some writers who use data as a plural count noun, and some who use it as a mass noun. In general, fighting to preserve proper Latin grammar in modern English is a lost cause. There will always be exceptions, but data is one of those words that is clearly changing to conform to modern English conventions."

So which is proper?

The Grammarist says: "It comes down to preference, and you can’t be faulted for using the one that sounds better to you. In general, data is still treated as plural in scientific and academic contexts, while it’s usually treated as singular in nonscientific contexts. In fact, using data as a plural (or using the word datum at all) can come across as pretentious in informal writing."
Posted by Bob Rini at 1:25 PM