Mario Batali explains the Italian tradition of having seven fish on Christmas Eve. Like Batali, I grew up in an Italian-American home on the west coast--no, not all Italians live in New York City--and interwoven with typical American Christmas festivities were ancient traditions going back to the Old Country, such as the Feast of Seven Fishes. The night before Christmas, we lit the tree and sang carols and gathered at the dining room table for la festa dei sette pesci, which generally took the form of a hearty cioppino, a stew of fish, crab, shrimp, clams, squid and more--a total of seven varieties of seafood in a delicious tomato-based broth. We'd dip crusty garlic bread into the stew and count the fish. Seven, always seven. The number is ancient and derived from some Southern Italian numerology that is biblical and symbolic and--for me, that kid waiting for Santa Claus--shrouded in Old Country mystery. Don't ask questions. Although my parents are learned, progressive people (Dad has a PhD and Mom is extremely well-read) we held on to this tradition. We were raised to appreciate our history and ethnicity and wanted to keep the old traditions alive. As far as we were concerned, there was no need to lose these colorful customs and assimilate completely into the homogenized mainstream culture. Of course, we were full-fledged Americans and saw no disconnect between the two (even if some people believed "American" meant WASP, White Anglo-Saxon Protestant), and even if in some quarters retaining any ethnicity whatsoever made one a lesser, hyphenated American. Not us. Food was a wonderful way to enjoy our background, and why should we give up this delicious seafood for green bean casserole out of a Campbell's soup can? No thanks. 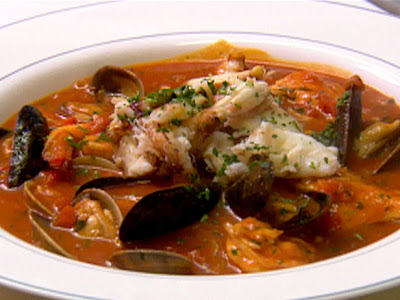 Nowadays the average American is more sophisticated about food. Farmers' markets and specialty stores provide easy access to fresh vegetables and fruit and good bread, but back in those days of bland Betty Crocker preparations, canned peas and fish sticks and Wonder Bread, keeping ethnic traditions alive was more than mere affection for the past, it was a matter of survival. And taste. Maybe the mainstream is finally catching up. Nowadays people consider themselves foodies, and everyone knows Italian food is more than just spaghetti and meatballs. Some even make brave attempts to pronounce the names of dishes correctly, including these commonly mispronounced ones: gnocchi (nyoh-kee), bruschetta (broo-sket-ah), ricotta (ree-koh-tah) , scampi (skahm-pee, not scamp-ee). (Eventually, after a few glasses of chianti (kyawn-tee) classico, they might attempt schiacciatina and cicerchia decorticata or the word for chickpeas, which was once used to ferret out foreign spies who simply could not pronounce it correctly).

For some people, bruschetta is tough enough. A reader wrote in to Steve Barnes in the Times Union:

I thought bruschetta was pronounced with a hard “ch,” yet servers persist in pronouncing it “sh.” Maybe I should just accept it like the local propensity for saying “fazool” instead of fagiole.

To which Barnes replied, "It seems fairly well settled that the word is pronounced 'broo-SKET-ah,' because in Italian, with the exception of perhaps a few regional/local dialects, “ch” is pronounced like 'k.' Anyone who lives in the Capital Region shouldn’t have difficulty with this even if their ignorance of Italian is absolute — just look at the word Schenectady."

In the meantime, start collecting your seven varieties of seafood for your cioppino (cho-pee-no) and get the rest of your Christmas shopping done! Bon natale!
Posted by Bob Rini at 7:46 AM