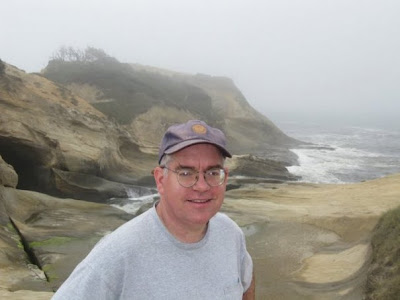 Our good old friend Scott passed away this morning after battling Stage-4 prostate cancer.  He was the subject of a New York Times article this weekend (LINK).  Scott was brave throughout this battle--and brave allowing Nicholas Kristof to write about his case within a story in favor of "Obamacare."  Allready apologists for insurance companies and Mitt Romney have take a few potshots in the comment sections, remaining anonymous for the most part.  Unlike Scott.

We visited him yesterday around five PM.  He seemed exhausted but managed to smile.  The blueberries on his bedside table sparked a conversation about the proliferation of berries where we grew up in Oregon, and how there were so plentiful you had to cut them down like weeds.  That's him above, in a picture I took near Pacific City on the Oregon Coast.  We first met in the early eighties, when he was home for summer from Harvard. We became housemates in a funky three story dwelling in NW Portland, back when NW Portland was cool.  As fellow Oregonians, we'd seen our share of rain, and this day in the hospital we stared at it from his 12th floor window.  Nurses came and went.  One ran a test.  His temperature was 99 degrees.  We stayed a while longer, and I helped him role to his side.  In his weakened state he couldn't turn or lift his leg or move his pillow.  The Times article had come out earlier in the day, and there must have been some sense of finality in telling his story for the record.  We spoke about it briefly.  He said he had everything he needed.  Wendy noticed he looked tired, and we said next time we'd call before we visited.  We said we'd see him soon.  He was nearly asleep when we left.

That was yesterday.  Scott died this morning.  Wendy called around noon to tell me the news.  Our mutual friend Cheryl, another housemate in the NW Portland dwelling, had sent an email with the stunning message. As well as being an old friend of Scott's, she works as a nurse practitioner and throughout his illness she's been at his side running interference, driving him to clinics and interpreting the medical language of the docs.  "I am so sad to give you the completely shocking and unpredicted news that Scott has died - this morning, at about 9:30.  It was after a very abrupt septic crisis that caused his breathing to fail last night and lead to bleeding into his lungs...Scott was on a respirator for about 12 hours."  He left us this morning, and he will be remembered in many different ways by different people--as a thoughtful reader, a feisty debater, an Oregon farmboy, a Harvard graduate, a fan of Dylan and Neil Young, a beachcomber and a killer poker player.  We'll miss you, Scott.  Rest in peace, brother. 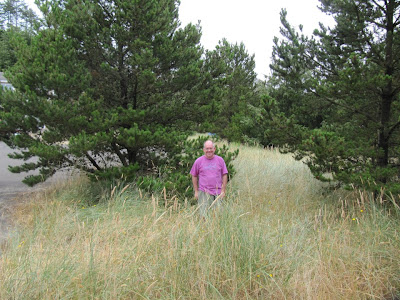 MORE OF THE STORY (added October 21):

After the initial story about Scott in the New York Times (A Possibly Fatal Mistake, October 14) there was such a flurry of responses, many very heartless and negative, writer Nicholas Kristof felt it was necessary to write a follow-up piece (Scott's Story and the Election, NYT October 17th).  There was also a story on National Public Radio, "Times" Health Care Op-Ed Gets Unexpected Reponse, October 18th.

As for me, the end of Scott's story was far from the public eye.  Thursday night there was a moving memorial for Scott in Seattle, where stories were shared by friends and family, fellow poker players and co-workers. There were some tears but also laughter, and a wall full of pictures taken throughout his life.  There were shots of Scott as a baby, as a grade schooler with a paper route, beside his student ID cards from Silverton High School and Harvard.  There were a few shots from the old Hoyt Street house where we met, when we were all much younger and had longer hair and not a clue what the future would bring.

On Friday there was another memorial in his hometown of Silverton, Oregon, held in a small funeral parlor with rose-colored wallpaper. There was an open casket, and flowers--including a wreath sent by his poker buddies with a fanned-out straight flush in spades. I was fortunate to attend both memorials and ever more fortunate to count Scott as a good friend. His hometown was in full golden autumn that day, and the sky cleared long enough to say our goodbyes at his graveside and share hugs and a shot of whiskey from a flask. Then we got back in our cars and it started raining again.
Posted by Bob Rini at 4:53 PM