I'll never forget the Columbus Day Storm. The winds were howling and two massive Douglas Fir trees in front of our house snapped like pipestems and crosscrossed our front door. Another smaller tree hit the house. Mom and I and my baby sister Bekki, who was just a couple months old, huddled in the kitchen as branches flew and crashed against the house. Dad drove home from work in Tigard, and had to dodge fallen trees and live electrical wires that were snapping in the road. We lost power--everyone did, I think--and I remember we went to my grandma's house. I've never heard winds like that. They were whistling. We cooked meals in the fireplace for a week. In the aftermath, roaming crews were cutting wood and collecting gasoline for generators--even the radio station was on special power and we listened for updates on our battery radio. 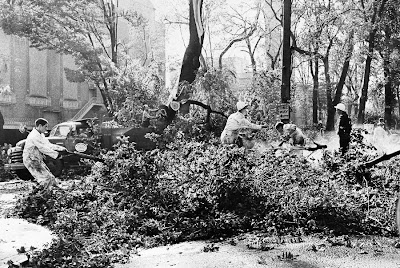 According to the Wiki, "The Columbus Day Storm of 1962 (also known as the Big Blow, and originally as Typhoon Freda) was an extratropical cyclone that struck the Pacific Northwest coast of the United States on October 12, 1962. The storm ranks among the most intense to strike the region since at least 1948, likely since the January 9, 1880 'Great Gale' and snowstorm. The storm is a contender for the title of most powerful extratropical cyclone recorded in the U.S. in the 20th century; with respect to wind velocity, it is unmatched by the March 1993 'Storm of the Century' and the '1991 Halloween Nor’easter' ('The Perfect Storm'). The system brought strong winds to the Pacific Northwest and southwest Canada, and was linked to 46 fatalities in the northwest and Northern California resulting from heavy rains and mudslides." 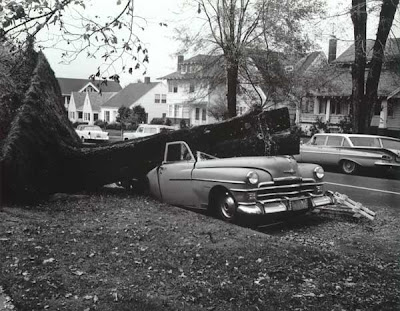 I was just a little kid at the time but the storm made a deep and lasting impression on me. It's the closest I've ever felt to the apocalypse so popular in TV and movies these days. Systems collapsed. Schools and businesses were suspended. People had to think on their feet and make new plans. Some were helpful neighbors and others lost it in panic. I'll never forget coming home from first grade on the bus, and how it was such a blustery day. I held a picture I'd colored about Christopher Columbus and the wind kept trying to tear it from my hands. Mom called from the back door as I crossed the field to the house. Hurry, hurry, a storm is coming!
Posted by Bob Rini at 8:31 AM