BANKSY ON THE STREETS 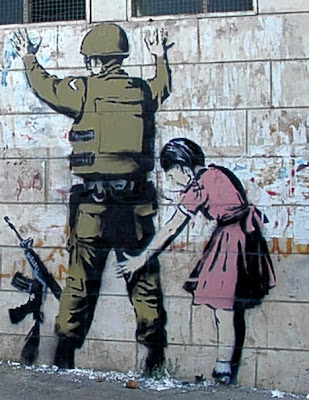 After the stir caused by radical street artist Banksy remixing The Simpsons' intro sequence (see earlier post, Banksy Creates Simpsons Sequence) and his recent wonderfully irreverent documentary, Exit Through the Gift Shop Door, in which he gleefully skewers the pretensions of the art world, Banksy remains a street artist first and foremost. Sure, he's collected by Brangelina and other wealthy celebutantes, and has been included in prestigious art shows (including ones he "vandalized"), but Banksy remains a street artist. And a mystery. His graffiti still shows up in public places, unsolicited and unannounced, to tweak the powerful and the piggish, and to challenge our sense of "freedom" in a tightly controlled society where our primary freedom seems to be the freedom to consume. He challenges private property and the conventional wisdom in one broad stroke of Krylon spraypaint or one hastily stenciled message. He works at night, in secret, and scrambles before the authorities catch wind of his activities. He is the mischievous trickster, the fly in the ointment, the wrench in the machine, the kid who says the emperor isn't wearing new clothes at all--he's bare-ass naked. One comment posted online said "Banksy belongs to the people not the bigwig art collectors and Johnny-come-lately critics" and we have to agree. Of course, we wish him a successful art career but we don't miss the point of his brilliant trajectory, either. Banksy is a street artist, and, in spite of what you may have been told, the streets belong to the people.