THE RALLY TO RESTORE SANITY 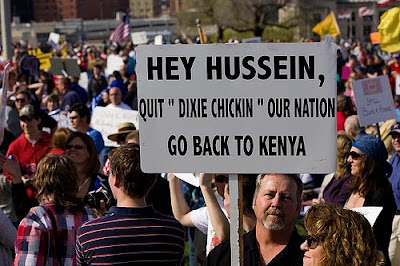 It's Halloween day. Fear and ugliness and hatred and greedy self-interest and self-pity are sweeping the nation like zombies in a cheap low-budget scary movie. Call them Teabaggers. Well, okay, the budget isn't low but the simile stands. It's scary! After ignoring the travails of others for hundreds of years, they have awakened when the topsoil of their own privilege is slightly disturbed, and they have crawled from the graves of apathy to shamble mindlessly from town to town with mouths full of half-eaten platitudes and claws clutching touchingly misspelled signs calling for an end to "Sochlizm" and "Helth Care" and a return to the good old days when different-looking people lived in their own neighborhoods and didn't upset the apple cart looking for less wormy apples. They move in a herd and call for a return to a time when other people didn't speak their mind and women stayed in the kitchen or the maternity ward and the gays stayed in the closet or the church and the blacks cooked in the messhalls and shined shoes and sat in the back and we all pledged allegiance with liberty and justice for all and thought we meant it. Oh, sure, people still beat their wives and had abortions, but they didn't talk about, they didn't rub your nose in it, they didn't walk down the street hand in hand while you scowled from the porch, they didn't protest against the war and they had respect for their elders, by God!

Well, they were good old days if you were hardworking, God-fearing citizens of a certain complexion, and everyone knew their place--but somehow they got this notion of freedom, which was our word, damnit, freedom, and they meant freedom for everybody. They heard about the Constitution, which had safely been hidden in a civics book, and they figured everyone should have a tasty piece of that Freedom pie, but that screwed everything up. Suburbs that had been built for open space away from the slums of the city suddenly couldn't restrict house sales to whites only, so they even showed up next door and shopping in the malls and starting little restaurants. They came over from other countries, and the old racial quotas of the 1920s intended to keep "a balance" of races, no longer seemed to hold water legally. All that jazz written on the base of the statue of liberty about come on over, give us the wretched refuse from your teeming shores, seemed to actually INVITE people from other countries to move here, and not just doctors and lawyers but people who spoke broken English, or no English at all, and worshiped different gods since somewhere some founding father wrote down we should separate church and state, which we thought was just a technicality until that point, and next thing you know people were praying to all kinds of things. Skin privilege started to mean very little, and people who normally had a good shot at the top now had no guarantees, which made some people fighting mad, especially the dumb ones who had no chance without that extra little edge in the good ol' boy's network. Sadly, the world and the country changed drastically and the folks who had it good hearkened back to the Good Old Days that the others knew never really existed, not for them, anyway. Finally, people rose from their slumber to complain. 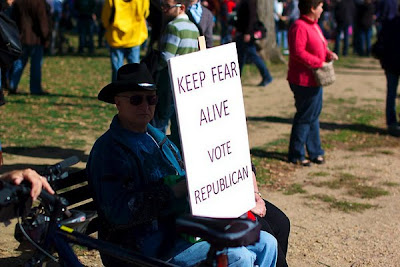 Jon Stewart, who doesn't even worship a Christian God, called for a Rally to Restore Sanity, and a good America named Stephen Colbert fought back on the very same day with a rally of his own, OUR own, called A March to Keep Fear Alive! Together, these two represented our divided nation. The signs were wonderful. The teabaggers didn't get the irony, of course, because that's a high level of cognition and they have a pretty basic cable package upstairs, you might say, but even so, the message was clear: these people did not agree with the fear and hatred and rage of the Tea Zombies. They would not stand pat while America was narrowly-defined by people like Sarah Palin and Glenn Beck and other right wing hustlers and conmen. They refused to be dittoheads because they wanted to think for themselves. It's a sneaky business, because the Republicans think they own the flag and the country, but the message seems to be this country isn't just about empty platitudes and fireworks but a republic guided by the principles of life, liberty and the pursuit of happiness. And "justice for all" means "all" not just when it's convenient or makes a profit. And "Freedom" isn't just a campaign slogan, and "Equality" means not just fairness for the wealthy and well-connected and white, but everyone. It won't be easy, you say? Surely not? Fascism is easy--you just become a follower ("dittohead?") of a fierce leader--and racism is easy--you don't have to rise about the default setting--but democracy is very difficult because every voice is valued--not just a certain race or tax bracket--but even people with a wide variety of skin colors and belief systems and religious views--and none should dominate. Sure it's tough. It's a lot easier just feeling wounded and blaming others and lashing out because you didn't get the whole pie, but we need to learn to share. Come on, children, act your age not your shoe size. 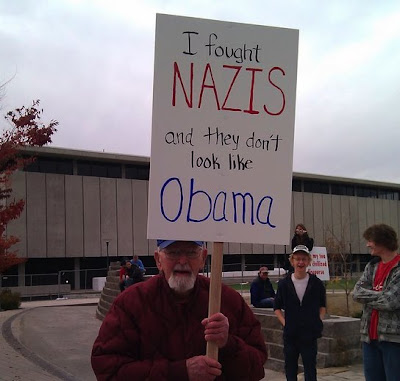 See some of the best signs from the Restore Sanity Rally here.

Here's another clip from the sanity rally with Stewart and Colbert introducing Yusuf Islam (formerly Cat Stevens) and Ozzy Osbourne to sing a couple train songs. Yusuf is Muslim and Ozzy is, well, crazy as a snake on a griddle, but somehow they create beautiful music together...er, sort of. You must admit, this looks a lot more fun than those psalm-singing Teetotaler Tea Parties. Let freedom ring! Thanks, Jon and Stephen.