Happy Birthday, John! Thanks for changing everything. This image-dazzle from the memory banks might remind you what the Beatles felt like in real time, something that's hard to replicate with an MP3 or a YouTube video clip or even a big box set of CDs remastered in the reality studios...the magic was in the moment. You had to be there. Maybe you didn't make it to Shea Stadium, but you were there when a new Beatles song hit the airwaves. The fad can't last, parents said. Fans wondered, How can they top this? And they did, every time.

From the outside, "Beatlemania" must have looked like sheer hysteria. For my generation, coming of age on the heels of the Cold War and the JFK assassination, with newsreels of Vietnam and Mississippi on the nightly news, the Beatles broke through the wall. They were raucous and fun and wildly creative and they gave us hope. They tweaked the noses of the squares and the stuffed shirts--even though it was Ed Sullivan, the quintessential stuffed shirt, who first introduced them to us one Sunday night between the plate spinners and Alan King. That night in 1964, we were shocked and thrilled. Now this was something new. 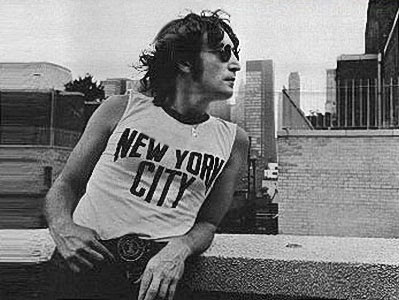 Just as my folks grew up with Sinatra, we grew up with The Beatles. There were other great groups in the sixties, of course, but the Beatles led the way and they provided the soundtrack of our generation. When the world seemed decidedly straight and conventional, these loveable longhairs combined the avant garde with their own working class roots, experimental music with Top 40 pop, the rocking rhythms of Buddy Holly and Little Richard with the introspective lyrics of Bob Dylan, and they laid the groundwork for what would become known as "the Counter-culture." John was at the eye of the perfect storm. With his wit and honesty and willingness to express of his own angels and demons--and perhaps the greatest voice in rock and roll--he became . He was an artist and activist who topped both the pop charts and Nixon's enemy list--and he was more than just another celebrity. He stood up for what he believed in, regardless of the consequences. We won't see another like him.

On October 9th, John Lennon would have been seventy years old.