Mick Jagger and Raphael Saadiq rehearse for the Grammys. You probably know Mick--but Saadiq is a talented singer, songwriter and multiplatinum producer of "old school" R&B who has worked with Stevie Wonder, Joss Stone and Jay-Z. Here Mick and Raphael rehearse a tribute to the late, great Solomon Burke, "Everybody Needs Somebody to Love." 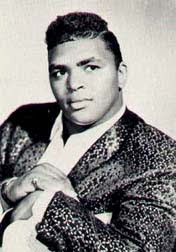 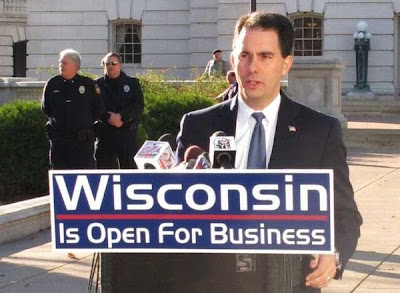 Republican Governor Scott Walker, a corporate shill who is leading a union-busting crusade against the public employees of Wisconsin, was punked. A clever prankster posing as billionaire conservative David Koch got the governor to spill the beans for twenty minutes. What followed was a revealing, candid dialogue that might have been written by Charles Dickens, or maybe Don DeLillo, in which Walker cozies up to the conservative billionaire while laughing about crushing the common man.

The call is disturbing but not surprising. A casual observer can easily imagine Walker's cozy relationship with his corporate handlers--and this call confirms it. His relationship with the Koch brothers, who have poured millions into conservative political causes including Walker's own campaign, is no secret. They got what they payed for. Listening to this chat, however, makes it visceral. The experience is unsettling, like overhearing the pillow talk of a whore and her john.

(Read more about the Koch Brothers in this New Yorker article, The Billionaire Brothers who are Waging a War Against Obama.)

It's clear in this taped phone call that Scott Walker obviously sees himself as a man of destiny, and if he's not drunk with power he's at least mildly buzzed when he compares himself to Ronald Reagan firing the nation's air-traffic controllers during a labor dispute in 1981.

"That was the first crack in the Berlin Wall and led to the fall of the Soviets," Walker says on the recording.

At the end of the call, the prankster, still disguised as David Koch, says: "I'll tell you what Scott, once you crush these bastards, I'll fly you out to Cali and really show you a good time."

"All right, that would be outstanding," Walker replies, adding that the standoff is "all about getting our freedoms back"

Listen to their conversation:

Cairo revolution sweeps...Wisconsin? Republican Governor Scott Walker, who has been governor for about six weeks, wants to bust the unions. His drastic plan would require public workers to pay more for their health insurance and pensions, effectively cutting their take-home pay by around 7 percent. The plan would also take away collective bargaining, and the right of public service employees to negotiate with the state over working conditions.

Walker's controversial plan has been met with massive demonstrations in the streets of Madison, an outpouring of people reminiscent of the recent revolution in Cairo. Like a Midwestern Mubarak, Walker says he won't budge. The protests have grown larger and larger.

To his defense, Tea Party activists have staged counter-demonstrations in support of the governor's union-busting plan. Once again they're working against their own interests, riding like Paul Revere in reverse, ready to warn the redcoats about the rebels. These misguided weekend warriors--who wouldn't even have a weekend without the unions--are on the wrong side of history.

Historic note: Wisconsin is the home of the 40 hour work week, unemployment compensation and worker's compensation--thanks to unions. Read more about the struggle for decent wages and worker's rights in this eclectic list of events in US labor history HERE.

Visit msnbc.com for breaking news, world news, and news about the economy

Rachel Maddow gives a rundown of the Wisconsin protests.
Posted by Bob Rini at 4:40 PM 1 comment: 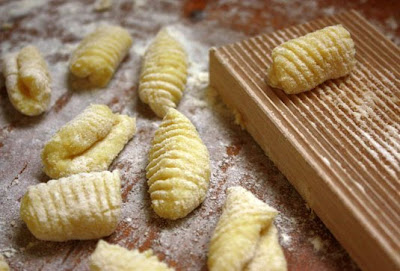 We're going to make gnocchi with an Italian chef this evening. One of the secrets to making good Italian food is using fresh local ingredients--so we'll be heading to the market. Start with some good potatoes--that's key. We'll need the perfect balance of potatoes and flour--too much of one is a disaster. Like Keith Richards says, "You need rock AND roll," which explains not only the gastronomical balance of potatoes and flour but also the attitude you need to make gnocchi. 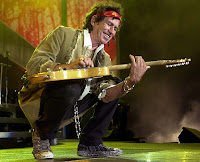 You need rock AND roll

After we make some gnocchi we'll take a walk through a market in Catania, Sicily. No, gnocchi didn't originate in Sicily, but regionalism means less nowadays and gnocchi are enjoyed wherever Italian food is eaten from the trattorias of Rome to the seaside tables of Cinque Terre, from the osterias in the chilly north to the family-run restaurants of the sun-baked south. And maybe your neighborhood, too.

The Roman legions introduced gnocchi to the far-flung corners of the empire, so isn't it about time you encountered these delicious cloudlike dumplings? In our Italian American household (should I say Calabrese/Sicilian/American household?) we've enjoyed these plucky little pillows for as long as I can remember. For birthdays we got to pick our favorite meals, and my choice was always gnocchi. Mom is the expert and she still makes them by hand, several varieties from Gnocchi di Semolina to potato gnocchi (my favorite). When non-hyphenated Americans talk about "comfort food" they usually mean bland, familiar meals like roast beef and mashed potatoes, but gnocchi top my comfort food list. Oh, and they're pronounced "NYO-key."

Heinrich Kley was born in Karlsruhe, Germany, in 1863, and studied at the Karlsruhe Akademy. He became an illustrator and painter of landscapes and animals, but his interests changed around the turn of the century and he began to include the factories and blast furnaces of the Industrial Revolution. Dark and weird settings, often inhabited by grotesque creatures and wild animals, always perfectly rendered with a free and loose style. 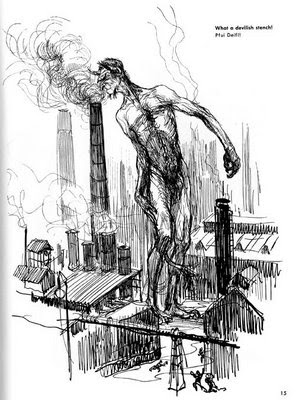 I first came across Kley's amazing work when I was 13 or 14 years old and it was like finding pirates' treasure. I bought a couple of inexpensive collections of his work at a downtown Portland bookstore, then immediately went home and slavishly tried to copy his brilliant drawings. Hours, days, weeks passed...who knows how long I spent struggling to capture his loose, apparently effortless style with my clumsy teenage fingers. His work may have seemed effortless but it required Herculean effort on my part. It was a humbling experience. The results were fare to middling, but I got to know those drawings intimately like a traveler who's crossed a great city on foot. Since that time I've had a number of good art teachers, both officially and off the record, but none taught me more about movement and line than Heinrich Kley.

You may click on these images to enlarge them


The amazing Ross Sisters from 1944 movie "Broadway Rhythm." We haven't seen it yet, but this has to beat the hell out of "Black Swan."
Posted by Bob Rini at 9:19 AM No comments: 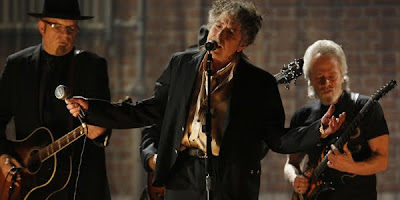 The 2011 Grammys show had some fine performances--Lady Ga-ga, Mick Jagger, Eminem, Cee Lo, and a star-studded tribute to Aretha Franklin--but everything was very high-tech and glitzy, heavy on production values and razzle-dazzle, very Hollywood, except for this odd little set of acoustic music. Three bands, three songs, all from another time and space, a place Greil Marcus called "old, weird America." With wooden instruments and harmonies, this set owes much to folk, bluegrass and backporch country music, and you can even hear strains of The Band and Dylan holed up at Big Pink. Then Dylan himself strolls out and sings "I Ain't Gonna Work on Maggie's Farm No More." The song--and the entire set--left J Lo scratching her head, but Neil Young dug it. So did we.

A stunning victory for the people of Egypt as Hosni Mubarak steps down--not long after publicly announcing he would absolutely NOT step down--and the resulting crowds in Tahrir Square celebrate with singing, chanting, car horns and peace signs. 307 people were killed by government forces during the 18-day occupation--not a small number, of course, but relatively bloodless for a revolution, especially a succesful one. The people held out against violence and intimidation, against empty promises and false hopes, against what seemed like the weight of historic inevitability, but they didn't give up. And they won. 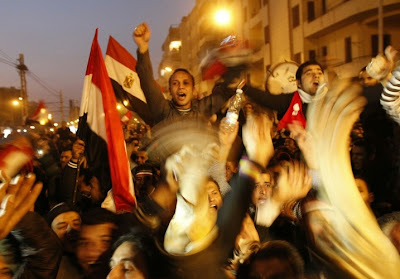 JAMMIN' AT THE PALOMINO

This is one of those crazy concert stories. It was February 19th, 1987, and Taj Mahal was playing with Jessie Ed Davis at the Palomino Club in North Hollywood. That would have been a good show, but then some people jumped on stage. Normally, you don't want people from the audience jumping on stage, but if they happen to be George Harrison, Bob Dylan and John Fogerty you let them do whatever the hell they want. On this lucky night, the audience was in for a treat as the band played a string of unrehearsed rock and roll oldies. Somebody in the audience had a movie camera. The production values may be low, but the spirits are high. You shoulda been there.

Here are highlights of Super Bowl XLV. While America consumed mountains of chips and oceans of guacamole, the Green Bay Packers--the only non-profit, community-owned major league professional sports team in the United States--handily beat the Pittsburgh Steelers, 31 to 25. It was a great game. Advertisers can rejoice; their much-ballyhooed commercials were sandwiched between plays during the most popular television broadcast ever, with 162.9 million viewers watching (for the sake of comparison, the census bureau reports that 307 million people live in the United States) and that's a lot of potential mass consumption. The commercials cost a fortune, and the most memorable were the ones for flavored sugar-water, fried starch and fermented cereal grains, mostly barley and corn.

Anyway, I lied about showing the game highlights. This clip is from the irreverent anti-war movie, M*A*S*H, from 1970. Enjoy!
Posted by Bob Rini at 9:43 AM No comments: