The night was mighty dark so you could hardly see, For the moon refused to shine. Couple sitting underneath a willow tree, For love they did pine. Little maid was kind-a 'fraid of darkness, so She said, "I guess I'll go." Boy began to sigh, looked up at the sky, And told the moon his little tale of woe.


This sublime musical moment from the 1939 film, "Flying Deuces," shows Laurel and Hardy a long way from home, having joined the French Foreign Legion, breaking into a musical number with the help of local musicians.
Posted by Bob Rini at 12:55 PM No comments:

Popeye is a sculptor, and Bluto paints in this wonderful 1937 cartoon from the Fleischer Studios.
Posted by Bob Rini at 5:43 PM No comments:

This commerical blindsided me last night during a football game. Apparently, a computer was pitted against a human being, albeit an extraordinary one. (Full disclosure: I'm a Dylan fan, but not enamored with IBM.) Without opening a can of worms regarding Bob "selling out," or the nasty history of IBM, or how many times you've seen Dylan in concert, or which smart phone you use, or football concussions, I present the commercial in its entirety for your amusement. I used to care, but things have changed.  Here's another Dylan commercial that played during the Super Bowl last year. 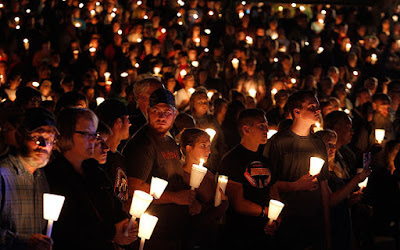 If ISIS killers showed up in Roseburg, Oregon, and executed students with impunity, maybe America would treat mass killing differently, but for now most middle Americans seem more afraid of losing their guns than losing their children. Gun apologists and lobbyists tell us to pray for the victims, but insist the solution to gun violence is more guns.  More guns was the solution for the lone gunman who walked into Umpqua Community College and sprayed bullets through classrooms, killing nine and wounding twenty; he had amassed an arsenal of 13 guns.

You've heard it all before.  It's the same old story, yet nothing has been done about it.  Since the Sandy Hook shootings, there have been at least 986 mass shootings, with shooters killing at least 1,234 people and wounding 3,565 more.  How long does it have to go on before people realize we're being held hostage by the gun lobby and gun nuts who misinterpret the U.S. Constitution?  Why is it harder to get a driver's license than a high-powered rifle?

Roseburg is a small town in the state of Oregon, my home state, where plenty of people own guns for hunting.  Many hunters fear the "Big Guv'mint" is going to take away their beloved guns, so they oppose any meaningful legislation that might stop future student massacres.  Even the smalltown sheriff handling the case, John Hanlin, didn't understand the situation until now.  According to news reports, he was one of hundreds of sheriffs around the country to vow to stand against any new gun control legislation. He even wrote a letter to the Vice President to that effect, insisting that, "Gun control is NOT the answer to preventing heinous crimes like school shootings."

So what is?  The answer isn't more guns, or making it easier with any halfwit with an axe to grind to buy lethal weapons.  This has reached a critical point of madness, where something must be done to make sure the nameless zeroes fuming in solitude don't get a chance to treat the rest of us like some video game fantasy.

Do we have to wait for the dumbest among us to catch up with reality, slow learners like Sheriff Hanlin, before we can enact some meaningful gun control laws?   I hope not, because there are plenty of dumb people out there who believe whatever they're told by FOX News and the gun lobby.  They may never come around.  Without realizing it, they believe the rights of this lone gunman are more important than the rights of children, students, and families trying to live in peace, without the risk of being shot by some madman on a death trip who bought his gun easily at a gun show.

Come on, people.  Get smart.  Let's make it a little tougher for the bad guys.

A quote from one of my favorite books, Catch-22, comes to mind:

"The enemy," resorted Yossarian with weighted precision, "is anybody who's going to get you killed, no matter which side he's on." - Joseph Heller
Posted by Bob Rini at 7:46 AM No comments: