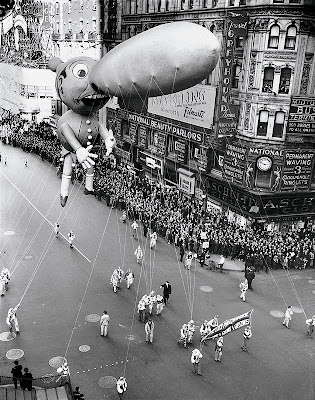 Thanksgiving Day is when Macy's has their parade, and this vintage photograph gives a rare glimpse of the Jimmy Durante balloon floating over midtown Manhattan. Everybody wants to get into the act. 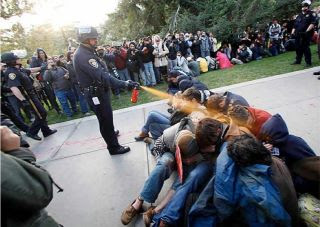 Whatever you may think of the Occupy protests--that they're an inconvenience with no clear goals, an unnecessary traffic jam, or a new social movement expressing justifiable anger over an inequitable economic system--you've got to be amazed by this video from UC Davis. It starts with riot police viciously pepper-spraying peaceful, seated protesters who posed no threat to anyone. That's not the part of the video that will amaze you. In fact, that's fairly commonplace in these days of quelling insurrections. The amazing thing is that these peaceful protesters shame the cops away.

After the usual chaos, in which students were handcuffed and arrested, a few tried something new. The remaining students encircled the police and shouted "Shame on you!" They didn't strike back (which the police understand, and would deal with swiftly and severely) and they didn't exactly turn the other cheek. They "mic-checked" the cops. "Mic-checking" is when one lone voice leads a chant and the crowd repeats, a simple method of communication practiced in these Occupy protests. The lone voice of reason starts it out:

Please watch the video till the end. Something's happening here. What it is ain't exactly clear. There's a man with a gun over there. Telling me I've got to beware. I think it's time we stop, children, what's that sound? Everybody looks what's going 'round. 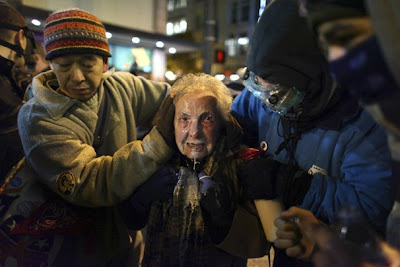 Tuesday night, Seattle police pepper-sprayed 84-year-old Dorli Rainey in the face in an obvious act of unnecessary police brutality. This striking image has gone viral. It has become the face of the national Occupy Wall Street movement at the time of a nationwide police crackdown. The photograph has been picked up by everyone from the Wall Street Journal to the New York Times. More important, this image may give pause to centrists applauding the crackdown.

Some pictures seem beyond spin. Sadly, they are not. While most reasonable people will see what is really there, some observers (newspeople, included) will shrug this incident off as mere collateral damage, a fluke in an otherwise spotless police crackdown. Some particularly agile pundits might even justify spraying the defenseless old woman, blaming the victim for being in the wrong place at the wrong time--then cite the bravery and courage of police confronted with difficult situations. Anyone who has ever been involved in a protest, who has stood with a flimsy sign facing a phalanx of riot police, knows that intimidation is a tactic, and this sort of "overreaction" is part and parcel of clearing an area. No, it shouldn't be. Will you find this tactic in a law enforcement manual? Probably not.

Sure, cops have a tough job, but don't mention their bravery and courage, not this time. The real bravery and courage in this case is embodied by a woman in her eighties who stood up for what she believed, despite the obvious risks. It may sound counter intuitive, but this little old lady might be braver than all those tough guys on the riot squad decked out like Darth Vader with machine guns and nightsticks and teargas and pepper spray. Today, we applaud the courage of Dorli Rainey.

In this clip, eighty-four-year-old activist Dorli Rainey tells Keith Olbermann about her experience getting pepper-sprayed by the police during an Occupy Seattle demonstration and the need to take action and spread the word of the Occupy movement. She cites the advice of the late Catholic nun and activist Jackie Hudson to “take one more step out of your comfort zone” as an inspiration, saying, “It would be so easy to say, ‘Well I’m going to retire, I’m going to sit around, watch television or eat bonbons,’ but somebody’s got to keep ’em awake and let ’em know what is really going on in this world.”
Posted by Bob Rini at 6:19 AM No comments:

Jimmy Fallon does an uncanny Jim Morrison impersonation. The clothes and camera angles are spot on copies of the Doors on The Sullivan Show when they performed "Light My Fire" in 1967.

Butterfly in the sky...I can get twice as high...

Just so you know (I didn't) they are performing the theme song from Reading Rainbow, an American children's TV show that aired on PBS from 1983 to 2006. I must have missed that, but I remember the Doors. 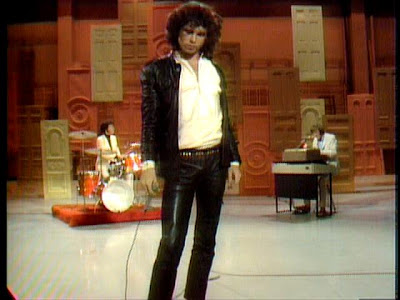 The real Jim Morrison on the Ed Sullivan Show, 1967
Posted by Bob Rini at 9:59 AM No comments:

DOA (1950) is a classic film noir that covers the last hours of doomed Frank Bigelow (Edmund O'Brien) as he fights for his life and scrambles to find his "murderer." Dark, yes, and essential if you like crime movies. The mood is saturated with darkness, a claustrophobic nightmare portrayed with expressionistic vigor. It all starts in a "jive" San Francisco nightclub called "The Fisherman," when a stranger swaps drinks with Bigelow. The house band goes wild in this scene, mirroring Bigelow's chaos and confusion in one of the earliest depictions of the Beat subculture on film. The next morning, Bigelow is sick with more than just a hangover and he visits a doctor. Tests reveal he has unknowingly swallowed a "luminous toxin," whatever that is. There is no antidote. In situations like this, it's good to get a second opinion. A second doctor agrees (Yep, luminous toxin, all right) and implies that the poisoning must have been deliberate. Bigelow remembers his drink tasted strange. He retraces his steps...

This time of year, with wet streets and brooding, overcast skies, film noir is a natural. So is music--especially lively music to pull you out of your doldrums. Enjoy this crazy jumpin' jive, and rent this classic (avoid the remake). Oh, and keep an eye on your drink. 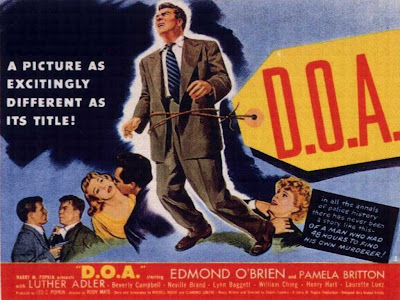 Thanks to Billy Hagen for this clip.
Posted by Bob Rini at 8:59 AM No comments: 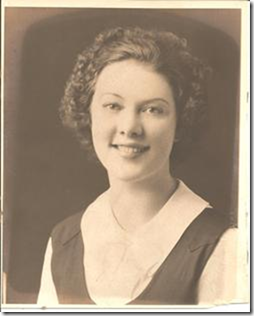 My Aunt Irene passed away October 22 at the age of 93. She was a spirited, warmhearted woman who treated people with kindness and generosity, something I recognized even as a child when many adults believed that "children should be seen and not heard." She always took time to talk with us, and treated us fairly. She told funny stories and always had some little yipper dog tagging along with her, and the last time we saw her she was with Taffy--as well as my cousins Diane, Tony and his wife Donna. We sat in their beautiful backyard, where a statue of the Virgin Mary squared off with the Buddha, and Aunt Irene told us stories about the time they attended a Flamenco dance and someone accidentally spilled wine so they secretly sopped it up with what appeared to be a napkin. Only when the dance began, and a Flamenco dancer stooped to pick up the cloth, did they realize the cloth--now soiled with wine--was part of the act. She told stories about Uncle Joe, who passed away in 1998, and how he asked for bread in a Chinese restaurant. "It's the staff of life!" he said.

Irene was born December 26, 1917 in San Francisco, to George and Lilian Brown Gibson. She graduated from St. Mary's Academy in Winslow, Washington, and Gray's Harbor Junior College in Aberdeen. She married my Uncle Joe in 1938, and had four children, my cousins Johnny, Diane, Cecelia and Tony. Irene was a dancer and she opened her own studio in 1949 where she taught tap and ballet for 35 years. When she retired, she formed a dance group, the Happy Hoofers, and performed throughout the region. We will miss you, Aunt Irene.

Attendees at an expensive breakfast were served some food for thought, thanks to Stand Up! Chicago. Union-busting Wisconsin Governor Scott Walker was the keynote speaker at Chicago's Union League Club the morning of Nov 3rd, but some unexpected guests did a "mic check" and reminded him the rich and powerful are outnumbered 99 to 1.
Posted by Bob Rini at 5:10 PM 2 comments:

Michele Bachmann speaking gibberish? So what's new about that? Nothing. This is a riot.
Posted by Bob Rini at 9:22 AM No comments:

DAY OF THE DEAD 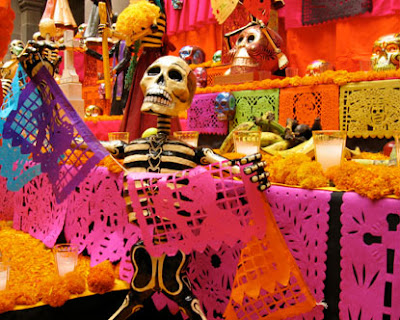 Today and tomorrow, Mexico celebrates "Dia de los Muertos," the Day of the Dead. Coming fast on the heels of Halloween, North Americans (yes, Mexicans are Americans, too) should appreciate the infinitude of colorful skulls and skeletons on these festival days, also known as All Saint's Day and All Souls' Day. The skull, or calavera, is a symbol of the festival and sugar or chocolate skulls will be seen during the celebrations, which date back to Aztec times. The holiday centers around the remembrance of the dearly departed and may include the building of shrines, parties with food and drink, and even graveside visits to share snacks or a bottle of tequila with the deceased.

Locarno play to a packed CBC house to celebrate Mexico's 'Day of the Dead'. "Locarno," according to their promotional materials, "is the Latin project of Juno award winning musician and Paperboys frontman, Tom Landa. The music, like him, is part Mexican but with strong doses of Cuban Son, Folk Music, Pop and Funk. There are threads of Son Jarocho and Salsa but the songs are more edgy and contemporary than that. The music could be compared to Manu Chao, Ozomatli or Rodrigo and Gabriela but although there are similarities it is truly original and a new flavour in the Latin music genre."