The Wachowski Brothers, best known for The Matrix, could certainly ruin this complex book the New Yorker describes as "six interlocked and rotating novellas, each completely different from its neighbor: the journal of an American notary, travelling by boat from Australia to America in the eighteen-fifties; the letters of a young bisexual English composer, sent in the nineteen-thirties to a college friend; a slice of nineteen-seventies paranoid political thriller, in which a young California journalist takes on a sinister energy corporation." Yup, there are plenty of ways to screw this up. Overemphasis on the dystopian sci-fi elements, which the W Bros have shown a weakness for in the past, could outshine the more lyrical elements and ruin the balance, and one of Mitchell's amazing tricks was keeping these interwoven tales in balance and displaying them within one another, stories within stories like a Russian nesting doll. Can these sci-fi boys pull it off? Will they reduce the complexity of the book's structure--and how could they not, given just two hours? I'll be sitting up front, geeking out with my Junior Mints and Diet Coke and raised eyebrow, happy I'd read the book (and by all means, read the book) but hoping to be surprised, mind-boggled, challenged, or at the very least entertained. 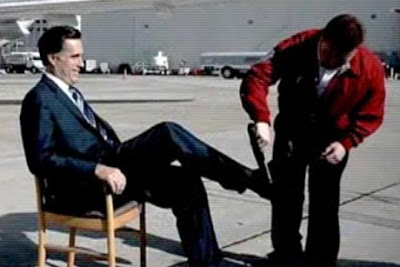 One of presidential candidate Mitt Romney's campaign advisers blundered into political quicksand by explaining to The Daily Telegraph that President Obama doesn't fully understand the "Anglo-Saxon heritage" of the United States. “We are part of an Anglo-Saxon heritage,” the adviser said, “and [Romney] feels that the special relationship is special. The White House didn’t fully appreciate the shared history we have.” Coming on the eve of Romney's trip to England, the  could be seen as mere political pandering if not for the nasty undertone of the remarks (and there were more) which raised charges of racial and ethnic insensitivity.

Ignoring the fact that the USA and the UK are now more multicultural than ever, and that the US was multicultural from its inception, these advisers' ill-advised attempts at cozying up to the Brits backfired, sending candidate Romney backpedaling faster than a juggling unicyclist in the Cirque de Soleil. Mitt denied everything, of course, but one gets the distinct impression that had these remarks not raised eyebrows he might have been content presenting this racially narrow view of an homogenized nation, an exclusive country club of a country that not only skips the contributions of so many (that, at the core, is the American experiment; something a presidential candidate should know) but also manages to skip the importance of forging alliances with other (non-Anglo-Saxon) countries. More insidious than these blindspots, was the fact that these advisers also managed to play the race card, since--needless to say--Obama is obviously not of Anglo-Saxon heritage.

“Obama is a Left-winger," continued another adviser, apparently acting out the script of Dumb and Dumber. "He’s very comfortable with American decline and the traditional alliances don’t mean as much to him. He wouldn’t like singing [the patriotic British anthem] ‘Land of Hope and Glory.’"

One might argue that Mitt Romney didn't deliberately intend to present such cultural insensitivity, and that his monochromatic view of the country, and the world, merely reflect HIS view from the elite country club vantage point of the ultra-wealthy from which he hails, a world where WASPS are exceedingly well-represented, but that's no excuse. The man is running for president, after all, and that means president of all of us, not just a single social class or racial group, skin color, or tax bracket. 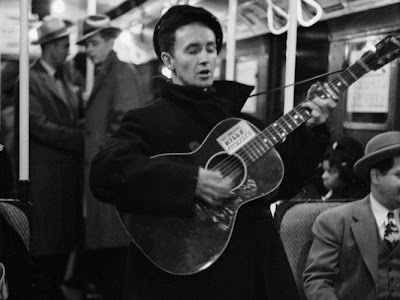 Woody Guthrie, songwriter, guitar player, union organizer, rail rider, troublemaker, was born a hundred years ago today, on July 14th, 1912.  Riding the rails in the Great Depression, Woody earned the nickname "The Dust Bowl Troubadour," and is most famous for writing "This Land is Your Land."  For his trouble, Woody made plenty of good friends, helped many good causes, and was beaten, jailed and blacklisted by crooked cops, company goons and right wing politicians.  Woody often performed with a guitar that displayed the slogan, This Machine Kills Fascists.  He died from Huntington's Disease, and was visited often in his New Jersey hospital by a very young and infatuated Bob Dylan, who knew every Woody song by heart.

Perhaps it's fitting that today is also Bastille Day, In France, Le quatorze juillet (the fourteenth of July) celebrates the 1789 storming of the Bastille, a fortress-prison known for holding political prisoners critical of the monarchy, and a symbol of the absolute and arbitrary power of Louis the 16th's Ancient Regime.

Today is a good day to celebrate rebels.


"This Land is Your Land" -- including the words they left out of your school book--performed by Bruce Springsteen, with his friends Arcade Fire, Joe Ely, Tom Morello, Alejandro Escovedo and Eric Burdon. Live at SXSW, March 15, 2012.
Posted by Bob Rini at 7:25 AM No comments:

Across the street, in the highly exclusive country club golf course that costs a fortune to play, two well-appointed golfers just strolled past with a driverless robotic caddy close behind carrying their clubs. A few minutes later, the gods--being playful if nothing else--launched a terrific thunderstorm. Now rain is falling on the golf course, the neighborhood, upon the rich and poor alike.

Thunder!  A thunderstorm is a good excuse to play this tune from a dark B-movie (what the French would discover as "art," and call a film noir) "Thunder Road," starring Robert Mitchum as Lucas Doolin, a bootlegger's son who ran his daddy's whiskey in a hopped-up 1951 Ford 2-door hot rod with a custom tank in the back for moonshine.  Being a film noir, Doolin was doomed from the start, but he followed his own code--even though it put him at odds with society.  The final chase scene is classic.

Along with acting, Mitchum produced the 1958 film, co-wrote its screenplay, and some say even directed much of it himself.  He also co-wrote the theme song, "The Ballad of Thunder Road," which he sings here in all its doomed glory.

He left the road at 90; that’s all there is to say.
The devil got the moonshine and the mountain boy that day.
Posted by Bob Rini at 10:40 AM No comments:


Mitt Romney addressed the annual NAACP convention Wednesday and was met with loud, sustained boos when he promised to repeal President Obama’s health care reform law. Romney seemed stunned by the reaction.  Evidently he's used to getting cheered on that line.  Shortly after the stumble, Romney sucked up to the crowd.  “If you want a president who will make things better in the African American community, you are looking at him,” Romney said. The line was met with some applause and some more boos. “Take a look!” Romney said.  Oh, they did.
Posted by Bob Rini at 11:05 AM No comments:

FOX NEWS IS A PERSON, AND A DIRTY ROTTEN LIAR

"How can FOX News lie time and again and still call itself a news agency?" Thom Hartmann takes us on a very informative trip through the legal history of a corporation allowed to lie, with legal protection, since people lie, and corporations enjoy all the rights of people, and have "ever since that 1886 Supreme Court case of Southern Pacific Railroad versus Santa Clara County when a rogue court reporter named JC Bancroft Davis slipped corporate personhood into the legal record."  Did somebody get hit with the stupid stick?  Is this any way to run a fare and equitable society?  Of course not, but the courts have ruled time and again that corporations have all the rights of actual people--so while actual people have watched their civil liberties whittle away in this era of Homeland Security, they can rest assured their rights are alive and well--serving fat and happy corporations.  To paraphrase Will Rogers, It looks like common sense ain't too common around here.
Posted by Bob Rini at 4:40 PM No comments:

Watch The Independent Woman on PBS. See more from America in Primetime.

We thoroughly enjoyed "America in Primetime," a four part documentary exploring various aspects of television from its inception to the current age.  The PBS series examines portrayals of several key archetypes over the years: The Man of the House; The Independent Woman; The Misfit; The Crusader.  TV reflects (and sometimes challenges) the values of society, and the case is made with a great collection of interviews and clips from "I Love Lucy" to "The Wire," "Father Knows Best" to "Mad Men," "Leave it to Beaver" to "Breaking Bad."  Watch these clips, and watch the entire series on Netlfix.

Watch The Crusader on PBS. See more from America in Primetime.
Posted by Bob Rini at 10:53 AM No comments: