SOMETHING IN THE AIR

Looking forward to "Something in the Air," a film about the events of May '68 in Paris by French filmmaker Oliver Assayas. I read an interview with Assayas in Cineaste, and he sounds fluent in the history of the time and isn’t just using the period as a cool backdrop to an otherwise formulaic story. I'm sure such a foreign, political film will vanish quickly from the art house theater (and never set foot in the Megaplexes) so I'll have a bag packed and be ready to pounce when it shows up.

The following is from Richard Porton's preview in Cineaste, and describes a scene within the film about film, a meta moment that raises questions about revolutionary art: "A spectator wonders why revolutionary films need to be made in the style of the bourgeoisie and insists that 'revolutionary films call for revolutionary syntax.' A member of the film collective responds that 'revolutionary films have to be made with a syntax understood by the proletariat' and claims that the radical style the purportedly avant-gardist audience member is advocating is just for 'aesthetes' and the 'petit bourgeois.' This brief exchange mirrors many key twentieth-century debates involving Lukacsian realism versus Adornian modernism, Costa-Gavras versus Godard and Cahiers du cinéma, as well as ongoing tensions between experimentalists and populists, who view the avant-garde as hermetic and champion the virtues of “accessibility.”

Well, it ain't Iron Man III, that’s for sure--though there's nothing's wrong with that film (I'm looking forward to it, in fact) though I don’t expect any big box office battle between the two. Summer’s here and the time is right for comic book movies, after all. (Actually, a combination of the two films might be interesting: if only the students and workers in the French film had Iron Man suits... Note to self: write that screenplay). 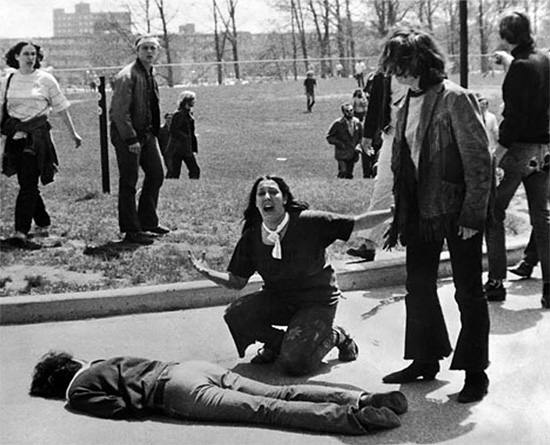 May 4, 1970.  The battle lasted 13 seconds at Kent State, when Ohio National Guardsmen opened fire on unarmed students, wounding nine and killing four.  The photographs shocked a nation.  A few days before, on April 30, with the help of Henry Kissinger, his national security adviser, Nixon had broken his campaign promise and widened the Vietnam war, concealing plans to invade Cambodia from Congress and from Secretary of State William Rogers and Secretary of Defense Melvin Laird—not to mention the American people.  When campuses erupted in anger, Nixon said four days after Kent State: ''I have not been surprised by the intensity of the protests.''  He went on to add that Kent State ''should remind us all once again that when dissent turns to violence, it invites tragedy.'' Blaming the victim was Nixon’s stock in trade.  He implied the students shot had been violent, throwing rocks at the Guardsmen, and that they were asking for it. Months later, the FBI report confirmed what we had suspected: that the students had posed no threat to the Guard: ''Jeff Miller's body was found 85-90 yards from the Guard. Allison Krause fell about 100 yards away. William Schroeder and Sandy Scheuer were approximately 130 yards away from the Guard when they were shot.... Sandy Scheuer, as best we can determine, was on her way to a speech therapy class. We do not know whether Schroeder participated in any way in the confrontations that day.'' Quotations courtesy of Martin F. Nolan.
Posted by Bob Rini at 7:47 AM No comments: