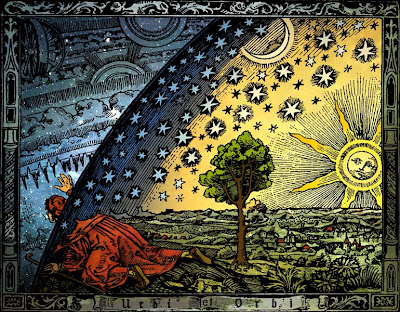 "If the doors of perception were cleansed every thing would appear to man as it is, infinite. For man has closed himself up, till he sees all things thru' narrow chinks of his cavern." -William Blake

“We owe a huge debt to Galileo for emancipating us all from the stupid belief in an Earth-centered or man-centered (let alone God-centered) system. He quite literally taught us our place and allowed us to go on to make extraordinary advances in knowledge.” -- Christopher Hitchens

"I'm astounded by people who want to 'know' the universe when it's hard enough to find your way around Chinatown." -Woody Allen

"Life's but a walking shadow, a poor player, that struts and frets his hour upon the stage, and then is heard no more; it is a tale told by an idiot, full of sound and fury, signifying nothing." -- William Shakespeare

"Life is what happens to you while you're busy making other plans." -- John Lennon

"If we look deeply into such ways of life as Buddhism and Taoism, Vedanta and Yoga, we do not find either philosophy or religion as these are understood in the West. We find something more nearly resembling psychotherapy. ... The main resemblance between these Eastern ways of life and Western psychotherapy is in the concern of both with bringing about changes of consciousness, changes in our ways of feeling our own existence and our relation to human society and the natural world. The psychotherapist has, for the most part, been interested in changing the consciousness of peculiarly disturbed individuals. The disciplines of Buddhism and Taoism are, however, concerned with changing the consciousness of normal, socially adjusted people." -- Alan Watts, Psychotherapy, East and West

“Beyond work and love, I would add two other ingredients that give meaning to life. First, to fulfill whatever talents we are born with. However blessed we are by fate with different abilities and strengths, we should try to develop them to the fullest, rather than allow them to atrophy and decay. We all know individuals who did not fulfill the promise they showed in childhood. Many of them became haunted by the image of what they might have become. Instead of blaming fate, I think we should accept ourselves as we are and try to fulfill whatever dreams are within our capability.

Second, we should try to leave the world a better place than when we entered it. As individuals, we can make a difference, whether it is to probe the secrets of Nature, to clean up the environment and work for peace and social justice, or to nurture the inquisitive, vibrant spirit of the young by being a mentor and a guide.”
― Michio Kaku

"The road to enlightenment is long and difficult, and you should try not to forget snacks and magazines." -- Anne Lamott

“In the beginning, God created the earth, and he looked upon it in his cosmic loneliness.

And God said, 'Let Us make living creatures out of mud, so the mud can see what We have done.' And God created every living creature that now moveth, and one was man. Mud as man alone could speak. God leaned close to mud as man sat, looked around, and spoke. "What is the purpose of all this?" he asked politely.

'Everything must have a purpose?' asked God.

'Then I leave it to you to think of one for all this,' said God.

And He went away.” --Kurt Vonnegut, Cat's Cradle

“You have noticed that the truth comes into this world with two faces. One is sad with suffering, and the other laughs; but it is the same face, laughing or weeping. When people are already in despair, maybe the laughing face is better for them; and when they feel too good and are too sure of being safe, maybe the weeping face is better for them to see.” --Black Elk
Posted by Bob Rini at 9:53 AM