There's an old riddle: What's the difference between the Hindenburg and Rush Limbaugh? One is a flaming Nazi gasbag, and the other is a passenger airship. Rush proved it again this week when he called Georgetown law student Sandra Fluke a "slut" because she spoke up about women's health care and access to contraception. Rush went on and on, saying she was a prostitute, insulting her with viciousness of a man who hates women. And now--after an uproar threatens to pull sponsors from his show, something he understands--he has "apologized" to "Ms. Fluke." Well, sort of. 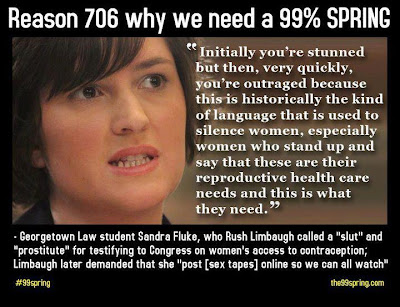 You know how these right-wing reactionaries work: they hurl sewage from positions of power, cause their damage, and then cry when people challenge their behavior, accusing their critics of being so "PC" that their freedom is threatened. Or something like that. These Republicans are always lamenting about the loss of decent behavior and manners and morals in society, yet they want to holler "slut!" when a woman speaks up or leaves her narrowly-defined social role as a docile, submissive ornament on a man's arm. I call bullshit on that. Rush--for your information, any return to civil society would exclude your fat, ugly, intolerant, pill-popping ass.


Maybe you wonder what the fuss is all about. This is Limbaugh's shtick, after all, being politically incorrect and outrageous for large sums of money, kind of like the kid in high school who would eat anything for a sum (yes, we had a guy...long story), but I don't think people are being thin-skinned to object to his virulently misogynistic personal insults. He should have to be civil like the rest of us. He's a rich, powerful man with a bully pulpit who slings mud at people he disagrees with, especially women, and he has a rowdy following of mostly powerless men who egg him on, give him money, and "ditto" his very thoughts--dupes to be sure--and yes, they will scream that calling your sister or mother a whore and a slut is a freedom of speech issue, and that the liberals are forcing them to act decently and "PC," but this isn't a barn full of farms animals but a modern society--and even barn animals would behave better, I should think. Sure, he might have to peel off a few bills to pay for this infraction, which would be easy for him, but maybe the best thing is for people to pull their advertisements from his show, and stop supporting his sorry ass.
Posted by Bob Rini at 6:28 AM