Earl Scruggs, the brilliant bluegrass banjo-player, passed away Wednesday in a Nashville hospital. He was 88. Scruggs left a legacy of amazing work and influence behind. Even if bluegrass isn't your cup of tea, check out this entertaining 90-minute documentary on Scruggs that originally aired on PBS in 1972. Scruggs was known for a unique three-finger picking banjo style that made women swoon and grown men weep. He collaborated with many great musicians throughout his career, and this film features performances with The Byrds, Joan Baez, Bob Dylan, Doc Watson, The Morris Brothers and, of course, Lester Flatt and Bill Monroe. Tip a jug and listen as Earl and his friends play that oldtime mountain music. 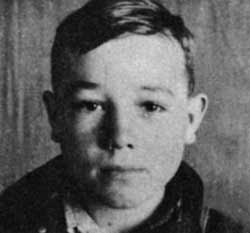 Young Earl Scruggs, born in the mountainous Piedmont region of North Carolina, played the banjo.
Posted by Bob Rini at 8:35 AM