After posting such wonderful jazz from the forties and fifties, in black and white, let's jump into an explosion of color for the sixties. More than a measurement of time, what we generally refer to as "The Sixties" didn't really blossom until midway through the decade--some say the first rumblings began with the Kennedy assassination near the end of 1963, Dr. King's "I Have a Dream" speech (also 1963) and the Beatles first live appearance on Ed Sullivan in early 1964--but the real riot of psychedelic flower power didn't bloom until 1966 or 1967, when the Summer of Love hit the Haight-Ashbury neighborhood like an exploding flower bomb and those black and white days were officially over. 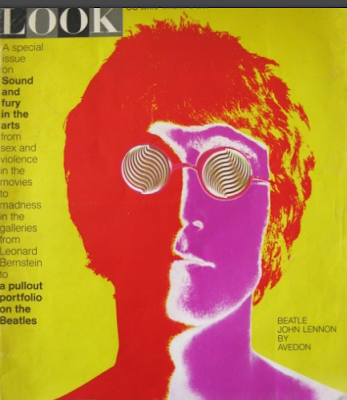 It was a bright, crazy, colorful time. A wind of change swept through music and art, theater and the cinema, fashion and hairstyles, attitudes about war and peace and civil rights, mores regarding sex and drugs, religion and politics. In a creative, colorful way, the counter-culture spit in the eye of convention. As Johnny Rivers put it later that year, "All summer long we spent grooving in the sand, and the jukebox kept on playing 'Sgt. Pepper's Lonely Hearts Club Band.'" Well, whether you spent that summer grooving in the sand, working a "straight" job, going to school, wading through a rice paddy, or simply growing up with your eyes wide open like me, it was a magical time. And this decade had an amazing soundtrack. For the most part, I heard "The Sound of the Sixties" through the tiny speakers of a small, Japanese transistor radio (remember those?) which was not really a radio at all, but a door into another world. I carried it on my belt loop through blackberry brambles and Scotch broom, climbing the roof of the goat shed, running secret reconnaissance missions on the deck Dad built overlooking the valley, crossing the overgrown filbert orchards and fields and woods, and certainly into my bedroom hideaway with its tiger skin blanket (Mom had sewn as a birthday present), its Revell monster models, its stack of Mad Magazines, its posters of Marvel comic book heroes and Jack Davis NBC promos for Get Smart and I Spy and Man from UNCLE. That trusty little transistor played a steady stream of Beatles, Stones, Beach Boys, Dylan, James Brown, The Animals, The Supremes and more, and the groups seemed got farther out with every new release. 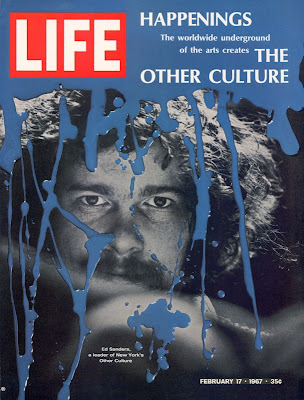 One summer day, I got the mail at the end of our long gravel driveway on Miller Hill Road, and a newsmagazine--Life or Look or Time--flashed what was happening down in San Francisco. Sandwiched between the cigarette and liquor ads and pictures of NASA astronauts walking in space there was a full-color (of course) photo spread of kids in the Haight wearing long hair and striped bell bottoms and peace signs. Standing there on Miller Hill Road, with Cobb Crushed Rock trucks speeding past, I said "Wow!" That would prove to be a common exclamation in those heady days. That summer The Beatles adopted old fashioned disguises as an old fogie dance band, namely "Sgt. Pepper's Lonely Hearts Club Band," and the Sixties were in full swing. Wow!

Maynard G. Krebs, the TV beatnik, unveils the first transistor radio in 1961, hinting at the revolution on the horizon. The film clip at the top of the post is a promo for "Yellow Submarine," which recently underwent a successful frame-by-frame scrubbing and restoration in anticipation of it's DVD release on May 28th.
Posted by Bob Rini at 1:31 PM