NEW BOOK BY KEROUAC AND BURROUGHS 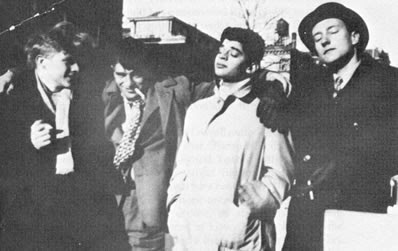 Crazy Beatnik Killers! That would be the title of the 1950s Hollywood cheapo exploitation film, anyway. No surprise that an even better title was cooked up by co-writers Jack Kerouac and William S. Burroughs. "The Hippos Were Boiled in Their Tanks", a new novel co-written by the two giants of the Beat Generation, is set to be published. The book was written over sixty years ago, was inspired by a murder that led to their arrests, the 1944 stabbing of David Kammerer by Lucien Carr, a friend of the writers and another Beat.

Carr served two years after pleading guilty to manslaughter, claiming Kammerer had been obsessed with him and had become a violent stalker.

After the killing, Carr confessed to Kerouac and Burroughs, who helped him dispose of the knife but did not go to police. Kerouac was arrested as an accessory to the killing in 1944 and was put in a Bronx jail but he was freed after his girlfriend, Edie Parker, posted bail. Burroughs was also arrested, but escaped incarceration.

The book is an early work, and probably not very good since neither writer was eager to see it published. Of course, Kerouac and Burroughs went on to worldwide fame with the publication of their later works, "On the Road," and "Naked Lunch," respectively. Penguin Classics will publish the new book in November.

Hear Kerouac recite "The Moon in Her Majesty" by clicking here.