You talking to me? A Thanksgiving vignette from a couple New Yorkers. Now stop busting my balls.

Thanksgiving is just around the corner. As previously noted, this is the season of the decorative gourds. The autumn leaves are beautiful gold and brown and floating down from the trees, but that's just window dressing compared to the real psychodrama of the holiday season, the high-stakes, high-stress melange of overeating, heavy drinking, unreal expectations, off-kilter family dynamics and good old weapons-grade nostalgia for a past that never really happened. Don't get me wrong--I love the holidays--but it's good to remember we're bound for the perfect storm and we ought to make sure our vessel is seaworthy. This dinghy has weathered many a holiday and we proudly fly the family flag, but it's time to batten the hatches and maybe scrape off some barnacles before the annual voyage into these familiar and sometimes treacherous waters.

In the past, before the term "dysfunction" became a household word (not to mention a cottage industry), the holiday was a lightning rod for "family fights" over at my cousins' place. Let's call them "The Hatfields." Every year, without fail, fists would fly at The Hatfields'. There would be a knock-down, drag-out wrasslin' match fueled by Four Roses and bad wiring, which the Hatfields had in abundance, and our poor cousins would inevitably drift over to our house with big hollow eyes and empty stomachs, telling us quietly that "Mom and Dad had a fight." Our house was a relatively safe sanctuary where they could lick their wounds before returning home to clean the turkey off the walls and pick their parents off the floor. Our house wasn't perfect, by any means, but it was warm and sustaining, comparatively-speaking. You walked in and the kitchen smells pulled you forward into the holiday.

Mom would start cooking the holiday meal several days in advance, fired by black coffee and zero sleep. Dad would sharpen the knives for the ceremonial turkey carving, his traditional role which no one could do nearly as well. After seventeen hours in the oven, a per-pound equation calculated with a slide-rule, the bird was presented. Dad addressed the turkey, considering it as thoughtfully as a surgeon (Dad is a doctor, but not that kind). After scrubbing down with hot water and soap, he would return in OR scrubs with a razor-sharp chef's knife. He studied the poultry again, with the knife poised above the shiny brown skin. This was no time to crack a joke, but sometimes it was impossible to avoid. If you joked, Dad would start over. Before the incision he might hush the room and utter something like "Will somebody turn that damn music down! I can't hear myself think!" And then, in absolute silence, he would make the first incision.

Pilgrims we were not, but we gladly shared our bounty with others, including my Mom's sister's crew (a different crew than The Hatfields, let's call them "The McCoys") and they would bring a pie or some warm oysters of unknown provenance, but it wasn't about payback. The cornucopia spilled forth without questions, and it didn't matter if cousins brought their current temporary boyfriends and they ate enough for two, or even if they raided the bathroom medicine cabinet for pharmaceutical hors d-oeuvres because it was a holiday, dammit, and it was all about giving thanks. So give some thanks. Now my sisters have grown up and gotten married and they have their own beautiful hungry children, and their own crazy opinions, and all thirty-nine of us cluster around the beautiful dark oak table (and the adjacent rickety card tables and TV trays) and devour the holiday bird and all the trimmings. It's possible someone may comment on the excellent food, or thank Mom, the exhausted chef, but this isn't likely. More likely, the surly anti-social elements will make comments about the giant jocks loaded on anabolic steroids colliding in slow-motion instant replay on TV, or comment on the merits of the wine they brought, or comment about poultry, in specific and general terms, such as the time one brother-in-law insisted turkeys were the smartest animals in the world, a "fact" we all absorbed in stunned silence as we ate our turkey, shocked that somehow chimpanzees and dolphins were out of the running, but one smart-ass at the table offered a clever riposte (not too loudly, for fear of upsetting the proverbial apple cart of the family dynamic) that turkeys must be smart if they stare up into rainclouds until they drown, since suicide is generally considered a moral crime of the larger-brained animals, mostly man. This sailed right over the congregation, but the in-law in question was forced to amend his original assertion with "I'm talking WILD turkeys" as if we were too dumb to understand the subtle distinction, and then, as if to punish us for our stupidity, ate all the potatoes with grim determination.

Ah, thanksgiving! To know it is to love it. It is a day to celebrate and give thanks. This year we'll be giving thanks to Tryptophan and hard liquor. God knows none of us are perfect, and when we love someone we forgive them their foibles and try to let go of some of our own issues. Christ said something like that at his last supper, but of course it was his last supper. He might have been less beatific if John had eaten all the potatoes, say, or if Thomas, ever the doubter, had questioned the intelligence of fowl in specific or general terms, or if Judas had scarfed down Christ's Vicodin. Or maybe he would have remained infinitely patient and loving and blessed them all, even the apostles who hadn't brought a thing, and maybe he would have sighed and said, What the hell, I'll just turn more water into wine. 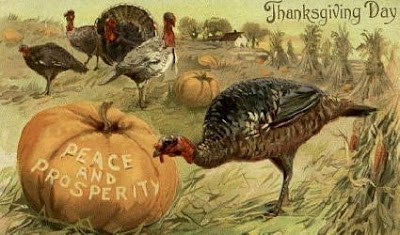