A HAMBURGER AT LE PIGEON

Gabriel Rucker, executive chef of Portland's Le Pigeon, is a culinary rockstar--in fact he looks more like a rock star than a nationally-recognized chef. For one thing, he wears a ball-cap instead of a toque, and for another, there are the tattoos; his arms are covered with birds, sharks, even a pigeon...Le pigeon? In all the glowing reports of the restaurant, and there have been plenty, everyone mentions the tattoos, so it's tempting to ignore them, but there they are, larger than life, running up and down his arms. Rucker comes to our table and chats even though it's a crowded Saturday night. He seems genuinely friendly, with none of the aspiring-to-Michelin self importance and stuffiness one might expect in a culinary whiz kid, and even though he looks like he'd be more comfortable with a Stratocaster than a Couscoussier, Rucker is the real deal, a first class chef. We watch him in the open kitchen with his sleeves rolled up--yes, see the tattoos again--cooking like a demon, pouring, scooping, stopping to taste a sauce. The kitchen area is very small and totally exposed to the diners, foodies, onlookers, people who managed to get a table on a busy Saturday night, so there is no five-second rule, no backstage trickery. Rucker may look like a slacker, but he doesn't leave the real cooking to the sous chef like some Food Network diva. Nope, he's a cook. That's what he does. 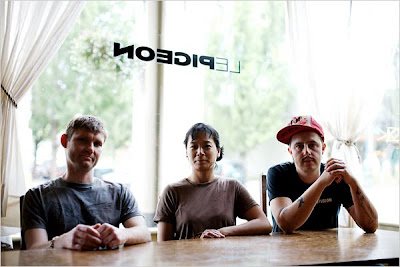 In this video, Rucker cooks a hamburger--one of five he'll serve on any given night--made with Tillamook extra sharp cheddar and Strawberry Mountain ground chuck. The rest of his food at Le Pigeon is French, or French-inspired, and it recently earned him a third James Beard Rising Star Chef nomination. He didn't get it this time, but he was in the final four. Better luck next time. By the way, though the burger looked good I opted for the Boeuf Bourguignon made with beef cheek, and it was delicious. I also had Foie Gras with Bacon, but don't tell the vegans. 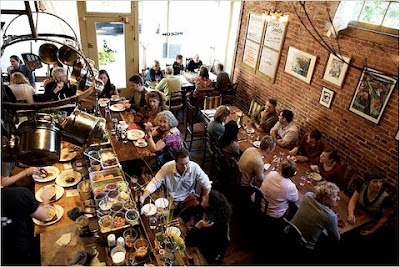 Read the NYTimes article about the Portland food scene here.
Posted by Bob Rini at 5:28 PM