Exile week continues. We're celebrating the imminent release of the Exile on Main Street deluxe box set, remastered, with additional tracks culled from the murky, bluesy sessions that produced that classic. Let's start off with Jimmy Fallon giving Mick Jagger directions on how to be Mick Jagger. Mick, the perfect gentleman (he's so respectable) tries to comply but it's hopeless. Being Mick takes practice. Even for Mick. 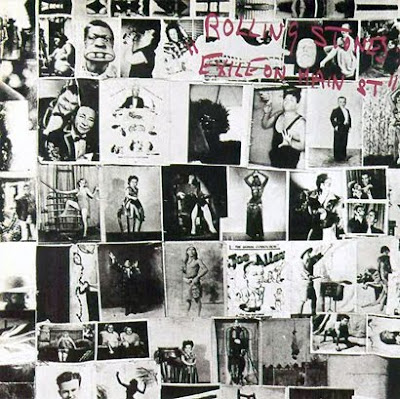 In case you think it's easy being Stones, here's a rare clip of the Exile band rehearsing backstage in 1972. Keith Richards leads the band in a loose blues jam, Mick Taylor plays rhythm, and that's Nicky Hopkins on the ivory keys. Then they jump into Slim Harpo's classic "Shake Your Hips." You might recognize the one-chord boogie from Exile (released in 1972, a year before ZZ Top came out with the similar sounding "La Grange" on Tres Hombres; More info in comments) And you thought being a Stone was mostly just indulging in drug-addled backstage debauchery. Well, it's also a lot of work! Rehearsals and practice! Step lively, lads! No rest for the wicked! It's like the old joke: Can you tell me how to get to Carnegie Hall? Practice!

Some people might go "Hey, ZZ Top!" but you know better. Slim Harpo wrote "Shake Your Hips" before the bearded ones had peach fuzz, and before Mick and Keith got around to it on "Exile." Harpo released the one-chord blues boogie on Excello Records in 1966, and the song was based on John Lee Hooker's "Boogie Chillen."

Bernard Besman, who owned the copyright to "Boogie Chillen," sued ZZ Top in 1992, but the court ruled that the song was in the public domain.