WHAT'S BURNING IN THE KITCHEN?

Andrew Carmellini is the chef-owner of Locanda Verde, a massive monument to haute cuisine in the Greenwich Hotel in Tribeca. Before that, Carmellini cheffed A Voce, Lespinasse, and Café Boulud, and is known for possessing some of the most respected French technique in the business. In this episode of Munchies, the chef took three dons of Italian cooking on a gala trip after hours. After hitting Matt Greco’s Char No 4 in Brooklyn, Carmellini and the gang made their way to Torrisi Italian Specialties, where renowned chef Cesare Casella was joined by Mark Ladner, the chef behind the Mario Batali empire, for some excellent food and jokes. Afterward, Carmellini took everyone back to Locanda Verde, where he and protégés Rich Torrisi and Mario Carbone made their way through a drunken late-night serving of tripe and eggs.

Cooks who party--that isn't news. It's part of the bad boy (or girl) image, right? There is something mythical--archetypal--about the hard-drinking, battle-scarred cook unfolding his bag of sharpened chef's knives like a pool hustler assembling his own cue-stick. It's part of the myth: carousing after hours, tattooed and leather-clad, getting hammered to obliteration yet cooking brilliantly the following day. Well, sometimes it's more than a myth. Apparently, sometimes the partying is part of the process.

In a fascinating story, the New York Times reports that a certain herb is influencing the fanciest foods we eat, and it's not basil or oregano. In the article, Marijuana Fuels a New Kitchen Culture (May 18, 2010), we learn that "in professional kitchens, where the hours are long, the pace intense and the goal is to deliver pleasure, the need to blow off steam has long involved substances that are mind-altering and, often enough, illegal." 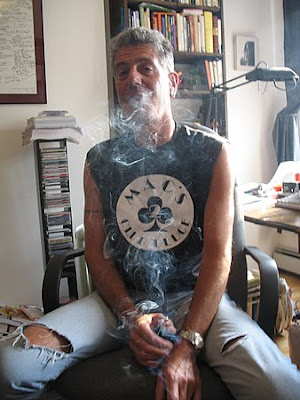 Anthony Bourdain made a career of it

“Everybody smokes dope after work,” says Anthony Bourdain, the author and chef who made his name chronicling drugs and debauchery in professional kitchens. “People you would never imagine.” 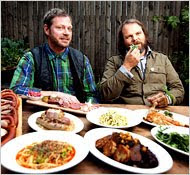 "The chefs and restaurateurs Frank Falcinelli and Frank Castronovo said most of their projects — going to Sicily to import olive oil to sell at their two Frankies Spuntino restaurants; the concept for their Brooklyn restaurant Prime Meats; even a new restaurant planned for Portland, Ore. — were conceived with the creative help of marijuana."

Just as these high end chefs (and foodies in general) rhapsodize about local vegetables, fresh fish just pulled from the sea, and the terroir of fine wine, they also seem to appreciate the provenance and quality of good cannabis. "The sensibility extends to the latest wave of coffee culture," says the Times. "Coffee geeks are as infatuated with their Pacas varietal beans from Central America as pot users are with their sticky sinsemilla from Humboldt County in California."

Should we be surprised? Medical marijuana is often proscribed to restore weak appetites, so it makes sense that people who live by their appetites--the chefs--might enjoy this well-known effect of the often maligned weed. More than just an after-work chiller, or the equivalent of drinking a cocktail to relax, these foodies enjoy a couple puffs of pot for its well-known ability to enhance the appreciation of food (not to mention music and sex). Call it "the munchies." While some stoners with the munchies wolf down Cool Ranch Doritos or Ben and Jerry's Cherry Garcia, these serious chefs take the munchies to the next level.

As odd as it sounds, for these chefs pot may be a performance-enhancing drug. Of course, it's one thing to eat and another to cook, and anyone working the line in one of these fast-paced, crowded, high-powered kitchens would be foolish to show up stoned.