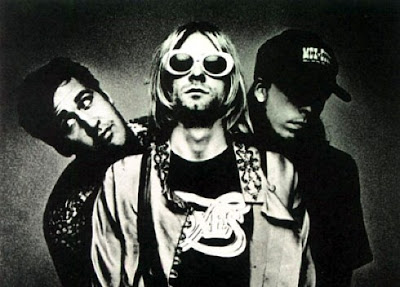 From the muddy banks of the Wishkah in flat broke Aberdeen it came crawling like a swamp creature through Olympia and up the Interstate--what was this rough beast, its hour come round at last, slouching toward Seattle to be born? Heavy, uncompromising and despising corporate rock with a defiantly punk spirit, Nirvana bum-rushed the stage. Anarchy was loosed upon the world. These scraggly misfits who didn't play the game ended up changing the game. Maybe it's ancient history to you now, or maybe you missed it completely, but back in the day this band let out a roar that shattered windows, a primal scream of angst and rebellion that made the A and R men scramble for pens to sign contracts, a blast that blew away the quotation marks of an ironic age.

For a while, anyway. For a moment, it was perfect. The witch was dead and Oz was finally safe. Then--Jesus Christ!--here come the flying monkeys and the commercial dorks with their Velveeta machines, and before you knew it "Le Grunge" was draped across Paris runway models and diluted like a beautiful rainbow puddle of oil in a Pacific Northwest drizzle. Suddenly, everyone recalibrated, slapped on wigs and grabbed kazoos, and even your square brother-in-law was suddenly sporting expensive Doc Marten knock-offs and nodding his big fat head to cheesy imitations like the Stone Temple Pablum. Then Kurt blew his brains out.

Nevermind. For one brief shining moment these bastards created something genuine, something painfully real and not just another boring pop commodity, but don't read too much into it--it was only rock and roll, after all. Leave it to the critics to bandy about theories. I've still got my records. How long has it been? Why give a damn?

Currently, a high profile art show is running at the Seattle Art Museum based on Nirvana. All the artists got to come out and play rockstars. A little late, I guess. There is plenty of wall-text rhapsodizing, mini-dissertations written in cool hindsight contextualizing this howling punk aesthetic within the boundaries of society and subculture, missing the point entirely since it was really all about personal risk-taking and refusing to cooperate with the bullshit, about liberating yourself from the conditioning of a bankrupt culture that eats its young. Did you love it? Did you hate it? Buy the T-shirt. Now go home.