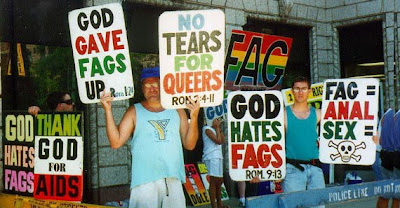 A showdown between bible thumpers and drag queens? You'd think we were talking about San Francisco, but we're talking about sleepy little Silverton, Oregon. Here's the story about the ruckus surrounding Stu Rasmussen, the small-town, cross-dressing, transgender TV repairman who became mayor of this conservative rural town. How did that happen? And what happened when hatemongers from the Westboro Baptist Church showed up to hassle "sinner" Stu? You might be surprised. This story goes beyond simple red state/blue state dichotomies.

Here's an excellent radio story about the Silverton clash from WNYC's Radio Lab:

The Westboro Baptist Church is infamous for intolerance. The church, run by Fred Phelps of Topeka, Kansas, first gained national attention for showing up at funerals of US servicemen with "God Hates Fags" signs, proclaiming to the grieving family--and to the media--that this soldier's death was God's punishment for America's tolerance of homosexuality. So is 9-11 and AIDs, they said. Yup, they're crazier than shithouse rats. Still, this cult--and that's what it is--represents a dangerous strain of homegrown American fascism that feeds on ignorance and hatred. They are a strange breed, both fearful and enraged, the shock troops you might see at teabag rallies and anti-immigration marches--or in old newsreels of Nazi Germany. Christians? Hardly. I have a feeling if Christ showed up teaching peace and love they would be among the ones that would crucify him all over again.

Here's some local television coverage of Silverton, before the hatemongers showed up: