Jean-Luc Goddard was a firebrand of the Nouvelle Vague--the New Wave--of french cinema, a movement of the late fifties and early sixties that also included Francois Truffaut, Claude Chabrol, Eric Rohmer and Jacques Rivette. Perhaps the most experimental director of the bunch, Goddard made films that were discussed like revolutionary tracts and high art by cafe intellectuals and students in the early sixties. Some of his films made it across the pond to US art house theaters and college campuses. Edgy, playful, occasionally breaking down the fourth wall and winking at the camera (literally), his films influenced many directors worldwide. Probably most famous for "Breathless" (À bout de souffle, 1960), in which a sleepy-eyed Jean-Paul Belmondo played out film noir fantasies with an easy coolness--with a slouched hat and a perpetual cigarette dangling from his giblet lips--and became the Bogart of the New Wave. 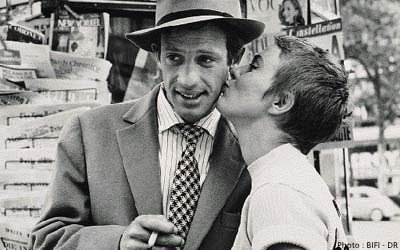 Belmondo and Jean Seberg in "Breathless"

Godard was political, and used film for art as well as agit-prop, especially later. He sided with students and workers in the 1968 May uprising, and chronicled the cultural revolution as well. Film had a new language, he seemed to say, and can--and should--be more than merely entertaining--it can aspire to art. It can be humane and urgent and challenging. It can abandon the old conventions. 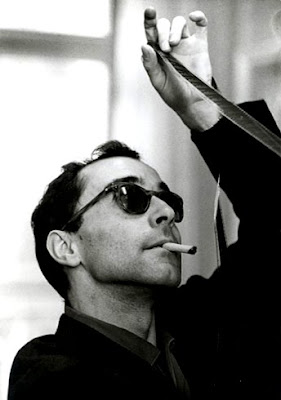 The film clip is from Bande à part ("Band of Outsiders," 1964), a film about a heist, ostensibly (more like a film about film, you might say), in which a trio of young people hang out, flirt, smoke, ride around Paris, and plan a robbery. This scene comes in the middle of the film, a set piece that Godard toys with, removing the sound, adding a voiceover, allowing it to go on for a long time, commenting on itself--but these couple minutes capture the louche life of these wannabe criminals. Cool, young and in love. Daring. Taking risks. Smoking. No wonder other directors were influenced by Godard. Watch the dance sequence in "Pulp Fiction" (1994) and you'll see Goddard all over it. (Tarantino makes no bones about it, and named his production company after this film.) Look at the films of Jim Jarmusch, particularly "Stranger Than Paradise" (1984), and see Goddard. Look around you.

A story should have a beginning, a middle, and an end... but not necessarily in that order. -- Jean-Luc Goddard
Posted by Bob Rini at 8:53 AM