So you woke up this morning and felt like you had the worst tequila hangover in history where the pain is right behind your eyeballs and your entire skull is throbbing, but it wasn't booze that did this; call it the midterm elections. The night before you watched the dismal returns roll in, and it seemed that every mouth-breathing ignorant redneck who could manage to utter a couple talking points and keep his pecker in his pants had defeated every halfway decent Democrat from sea to shining sea. Don't get me wrong--the Democrats can be terrible do-nothings and we're furious at them for their lack of fight--but these hate-filled teabags really took the cake--and the country--in a bad dream where naked self-interest paraded as righteous indignation, anger was touted as a virtue, and fear of foreigners and socialism and a black leader got them off their recliner chairs and into the streets to support the privatization of damn near everything, an end of taxing the ultra-rich, and praise for everything "business-friendly" with a holy "Jay-sus!" For these newly-awakened cretins, things started turning south once the slaves were freed and women got the vote (the Jezebels!) and children started speaking at the table. After that, it was all downhill, the bible was out the window, gays were in the military, smoking became a bad habit, and a half-black Muslim terrorist whose middle name was Joseph Stalin became President of the USA! Jay-sus! Liberal Democrats won an election somewhere in there, but that was during the Big Sleep, and they woke up with the help of Sarah Palin and Glenn Beck and various other wealthy professional pundits posing as average people. Next thing you know the corporations that had layed these folks off started flooding money into their cornpone campaigns, with strings attached, of course, somehow indoctrinating these folks to deregulate this and that and make it easier for them to lay people off, outsource jobs, and make more money. That's the American way, by gum, by golly--and the result is a lot of cranky people blaming this Knee-grow President for not saving us all from the terrible mess we're in. Remember the mess George Bush Junior left us? Blame the black guy, it's an old trick that generally works among simple white folk. Turns out there weren't no dang WMDs after all, and no magic bullets to cut taxes without going bust--there was only a big ol' mountain of horse manure that caught fire on the porch just before George W and his smirk retired to his ranch in Dumbass, Texas. Now W is taking it easy, hunting quail with Dick Cheney and his Haliburton cronies, and we're in a real fix. Turns out these assholes didn't know what the hell they were talking about! Turns out they cut our funding and turned a record surplus into the greatest economic disaster since the Great Depression. Turns out these teabaggers hate government so much they ran for office, and now they're going to be blocking every good idea that isn't pre-approved by bible-thumpers and fat cat CEOs. Turns out we're fucked. Let the gridlock begin! See? You got the hangover and didn't even get the tequila. 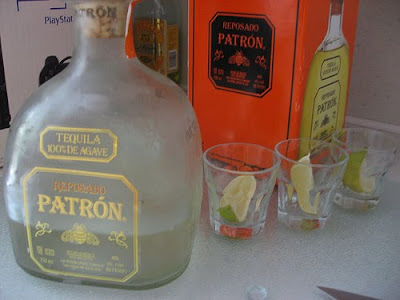 Next time, we get the tequila.
Posted by Bob Rini at 4:14 PM