Ron Charles of the Washington Post discusses the finer points of a fierce competition gripping the nation and hints at the likely winner. No, we're not talking about the goddamn Oregon Ducks. Yes, we know football is great and we're not casting doubts on your manly love for the game--we're just acting snarky about another grueling, muscle-bound, adrenaline-infused competition that somehow slipped under the Great American Radar--the National Book Awards. You might think nobody gives a damn since nobody reads, but you might be wrong. Books are cool. Really. And the awards are heated and full of (implied) violence and aggression. You watched the game, right? Imagine your favorite writers in the same spot with only nine minutes and 25 seconds left in a knockdown, dragout battle. You've had a couple stadium-sized Duck beers, a Duck Dog, and a big greasy order of Duck Nachos but they only gave you a teensy square of wax paper to use as a napkin--but that's okay, your beloved Ducks are up by two. You feel confident. Oregon has had a tremendous run this season--not unlike Jonathan Franzen, author of the much-acclaimed "Freedom" and seen on the cover of Time Magazine, virtually unheard of for a literary figure since the golden age of fiction--and everyone expects a clean sweep. And yet, and yet, just as you sit there on your Ducks pillow with your Ducks blanket over your lap, and your green Ducks carcoat over your shoulders, and your big yellow "O" painted on your forehead--they tell you the top-ranked Oregon Ducks--pride of Eugene and butt-slapping fanboys statewide--aren't even in the running! Your big green web-footed quackers are totally dissed! How can this be??? The injustice! After this charmed season, the emerald fowls of Autzen Stadium have been snubbed! Oh! My! God!

Well, you get the idea. The literary equivalent of just such a thunderous challenge and subsequent humiliation has occurred in the National Book Awards this year, and book critic Ron Charles will tell you about it with manly wit and vigor. 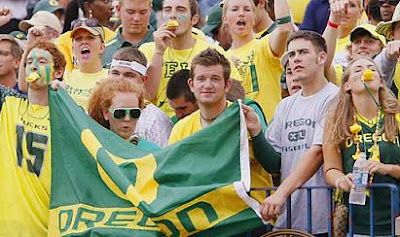