People talk about "alternative music," but it's not everyday you get to see some really jumpin,' pre-commercial, old-time music in the flesh. This music is rooted in the past, but don't get the idea it was just a time capsule, a musicologists presentation, or a reenactment of something on a wax cylinder from a vault in the Smithsonian--this was a kick-ass performance with all the sass and energy of an after hours tent-show. The Carolina Chocolate Drops brought the house down. This talented string band, led by dynamic Rhiannon Giddens and Dom Flemons, play Southern black music from the 1920s and ’30s—"string-band music, jug-band music, fife and drum, early jazz"--and last night in Seattle they even went back to the 1850s on one number, and threw in a few originals as well. What a show! Am I raving? Well, I should be. This is what music can do.

This film clip is a promo video of their 2010 album, "Genuine Negro Jig," which won a Grammy Award for Best Traditional Folk Album. The line-up has changed (the top clip shows the current group) but co-founders Giddens and Flemons remain. In answer to your question, "How come I've never heard of these guys?" let me remind you about the nature of commercial radio and TV, and how it's built to "move units" and appeal to a mainstream demographic--they play what sells, so if most people want Justin Bieber or Lady Ga Ga (or whatever current confection the industry chooses to poop out) that's what you're going to hear. Over and over. In spite of all the talk about "alternative music," to find music that is truly alternative, innovative, and creative you need to leave the well-trod path and dig a little deeper. Trade music with friends. Stay alert. Get up early. Support the good stuff. (maybe you learned about these guys here--if you like them, look them up and buy a record. Supporting real music guarantees its existence). Enough testifyin.' Listen! And take a look at the Carolina Chocolate Drops' website by clicking HERE. 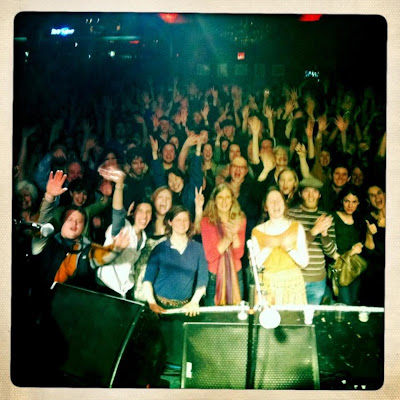 The Seattle crowd goes wild. Photo by Rhiannon Giddens
Posted by Bob Rini at 9:10 AM