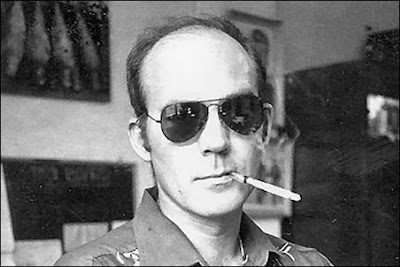 Beloved gonzo madman Hunter Thompson (July 18, 1937 – February 20, 2005), American journalist, author and drug-addled provocateur, still enjoys a cult following seven years after his death.  His gonzo journalism and snarky quips, often muttered or slurred, still delight the devoted like chum to sharks. This documentary will satisfy fans in the proper headspace, and while we don't necessarily condone Wild Turkey and illicit substances, they may enhance your viewing pleasure.  As Hunter once said, “I hate to advocate drugs, alcohol, violence, or insanity to anyone, but they've always worked for me.”
“Like most others, I was a seeker, a mover, a malcontent, and at times a stupid hell-raiser. I was never idle long enough to do much thinking, but I felt somehow that some of us were making real progress, that we had taken an honest road, and that the best of us would inevitably make it over the top. At the same time, I shared a dark suspicion that the life we were leading was a lost cause, that we were all actors, kidding ourselves along on a senseless odyssey. It was the tension between these two poles - a restless idealism on one hand and a sense of impending doom on the other - that kept me going.” ― Hunter S. Thompson, The Rum Diary

I grew up reading Thompson throughout the 1960s and 70s, following his Rolling Stone antics with a great deal of youthful, malcontent pleasure.

But, you know, as I matured and entered my own career of professional writing, I could very plainly see that Thompson hit his best and longest stride in the early days, that he had reached the summit of his mountain of bullshit WAY BACK in the old days.

His truly valuable writing, as far as I was concerned, ended with the rise of the Reagan administration. Everything after the Carter administration, seriously, was downhill for Hunter Thompson.

So I made a deliberate choice to respect Thompson for his early, rebellious years and to ignore his later, pathetic attempts to recapture the counter-culture flavor of the 60s and 70s, right?

I mean, you KNOW why Hunter's work sucked so badly for the last half of his life...It's because the Gonzos (the fucking big-money drugheads, the actors, the certifiably shameless lawyers, the ultimate bullshitters) got into the White House, they infiltrated Congress and the Judicial system, and for the last 30 years they have undeniably undermined America.

Today it's a Gonzo USA, you realize that, right? In this environment, Hunter Thompson could never survive.

Once he won, Hunter had no more giants to kill; and, no, that's not a victory for a giant-killer. When the last giant is killed, the giant-killer goes on the strongest possible depression medication, because the love of his life is forever lost, right?

When I heard that he had capped himself up at the ranch, I was saddened at first. But then I was angered, especially after reading his suicide note: "I want to go out while I'm on top."

Give me a break, Hunter, you pitiable coward. You "went out" 40 YEARS ago. After the 1970s, you were the walking dead, a mediocre novelty act.

If you'd been a TRUE rebel, a true REVOLUTIONARY, an ANARCHIST hell raiser, you would've continued beating hell out of these spineless vermin who are shredding the Constitution and undermining YOUR RIGHT to carry all those lead-spewing killing machines around your ranch, right?

Man. I'm so disappointed in Hunter Thompson. He was my hero at one time, if you can imagine that. Now I think of him as a tired old junkie who backed away and cowered from the bonfire he himself ignited.

Insightful, I'm 22 and about ready to put his 'work' aside, which I've been obssessed with for the last 3 years. First initiated by the F&L movie, then digging into all the books and literally everything I could find on the internet. I've learned alot...more than I cared to. Now I'm 3 years behind on a constructive education & healthy cognitive development. Disappointment & anger are what comes to mind. He's like the Larry Flynt of the dope industry. Just like you said - an ironic affirmation to the lifestyle he defended.