2/Lt. Albert A. Albino--my Uncle Albert--was an actor, a dancer, a champion swimmer and a fighter pilot who was shot down over Occupied Holland in November of 1943. Memorial Day, our family remembers my mom's brother Albert, an exceptional individual who gave his life fighting against a madman who wanted to destroy Jews, radicals, intellectuals, people with special needs--a just war if ever there was one. Graveyards are full of soldiers, sailors and airmen who fought Hitler, and they all had families, hometowns, and dreams for the future they never realized. Mom keeps a picture on the mantel of her brother Albert, who was listed as Missing in Action for many years until they found his remains in the late seventies in the town of Hoogeveen, Netherlands. He was finally brought home for a proper burial after more than forty years. These are the words of fellow pilot Bob Sands, who also flew with the 55th Fighter Group and 38th Fighter Squadron. His words might help you appreciate this man who died so many years ago. 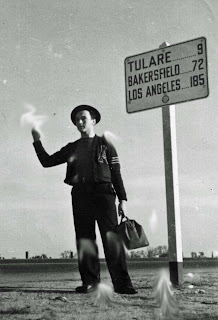 "I have very fond memories of this most likeable young man. I think every­one liked him, and I know he was a special favorite of the enlisted men. He had a sunny, effervescent personality, and always had something going. At one of our bases, perhaps Pendleton, OR, or Carys Kilmer, N.J., it was spread around that he was going to harangue the troops a la Adolph Hitler. We all assembled on the grass at one end of the barracks, and at the dramatic moment he stalked out onto the little second-story balcony, with hair slicked down as Hitler's was, and one hand holding a black comb with just enough showing to pass for Hitler's mustache. For quite a long time he capered and strutted, raged and sputtered gutteral, almost understandable German. He had us almost hysterical. It was a wonderful performance, and a great morale booster for a bunch of guys about to cross the ocean to an uncertain future. We were lucky, but he was not. He was lost on that sad day that C.O. Major Joel and three others (including Albino) were lost. But it was easy to remember the always-smiling face of Albert Albino, and I was sorry he was gone."
-- Robert Sands, via 55th FG Newsletter 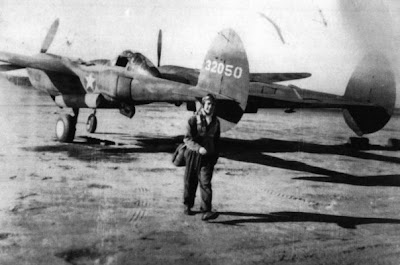