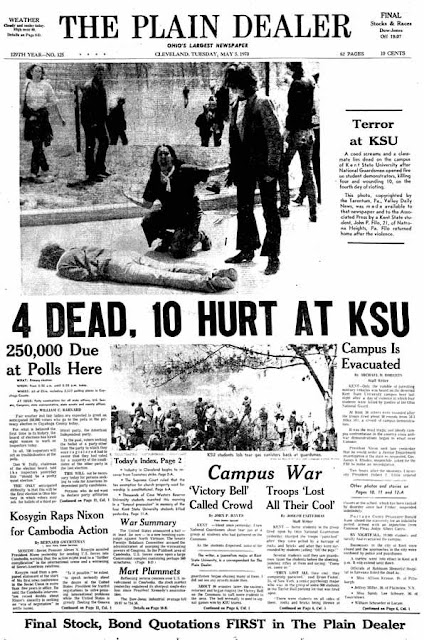 May 4, 1970. Four dead in Ohio.  The country was divided then, too, and some cheered the backlash against the student movement President Nixon called "bums" just a few days before.  Don't forget.

From the Zinn Education Project:  "May 4, 1970.  We remember Kent State, Jackson State (1970), and Orangeburg (1968). At Kent State University (May 4, 1970), the Ohio National Guard shot unarmed college students who were protesting the war and observers. The guardsmen fired 67 rounds over a period of 13 seconds, killing four students and wounding nine others. While most people know that students were killed at Kent State in 1970, very few know about the murder of students at Jackson State and even less about South Carolina State College in Orangeburg. In Orangeburg, two years before the Kent State murders, 28 students were injured and three were killed — most shot in the back by the state police while involved in a peaceful protest."
Posted by Bob Rini at 11:46 AM