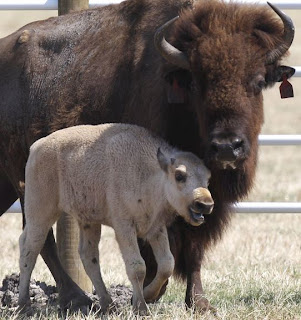 A White Buffalo, which is considered sacred by several Native American religions, was killed and slaughtered by rustlers on the Lakota ranch, near Greenville, Texas.  This picture was taken in June by the Fort Worth Star-Telegram.

According to the Fort Worth Star-Telegram Crime, "Lightning Medicine Cloud and his mother, Buffalo Woman, were killed just shy of the white buffalo's first birthday. Arby Little Soldier, great-great-great grandson of Sitting Bull and owner/operator of the Lakota Ranch, said Monday that he found the calf slaughtered and skinned April 30 after returning to the North Texas town from an out-of-town trip to Oklahoma City." Buffalo Woman died a day later. Little Soldier suspects she was poisoned.

According to the ranch website: "The Native Americans see the birth of a white buffalo calf as the most significant of prophetic signs, equivalent to the weeping statues, bleeding icons, and crosses of light that are becoming prevalent within the Christian churches today. Where the Christian faithful who visit these signs see them as a renewal of God's ongoing relationship with humanity, so do the Native Americans see the white buffalo calf as the sign to begin life's sacred hoop."

-report from the Two-way, the NPR blog, Fort Worth Star-Telegram

I've never seen one ever since. Well, on TV but not in real life. I would love to see one and I am actually searching for a place who have this animal. Just near my place.